You are here: Home » Reconstruction of the machine that inspired Colossus unveiled

A reconstruction of the codebreaking machine that inspired Colossus has been unveiled at The National Museum of Computing on Bletchley Park. The unveiling of the working Heath Robinson machine was performed by wartime Wren Irene Dixon in the presence of the great nephew of W Heath Robinson, the illustrator after whom the machine was named.

Courtesy of the Heath Robinson Museum in Pinner, a temporary exhibition of W Heath Robinson at War humorous illustrations was also opened and can be seen by the public six days a week during the Museum‘s new extended open hours.

The Heath Robinson machine was an early attempt to automate codebreaking during the Second World War. It was designed to tackle the hugely complex Lorenz cipher, used by Hitler and his generals to communicate strategic messages.

The complexity of the codebreaking machine resulted in its being named in honour of W Heath Robinson the illustrator, but he would never have known of this tribute because he died long before the secrecy surrounding Bletchley Park codebreaking was lifted.

“Seeing all this brings back many memories of my arrival at Bletchley Park in late 1943 to work on the new Colossus machine. I was able to see Wrens working on the original Heath Robinson. It produced good results, but the tapes broke so often that it was a major job to repair them. That was a tedious full-time glue job for somebody! In later years I was able to reassure a former Wren that she had been doing valuable war work!”

“Undoubtedly the 1940s team who named the codebreaking machine were deeply serious and committed but they identified with this humorous approach to technology rather than characterising it as a robotic device devoid of humanity.” 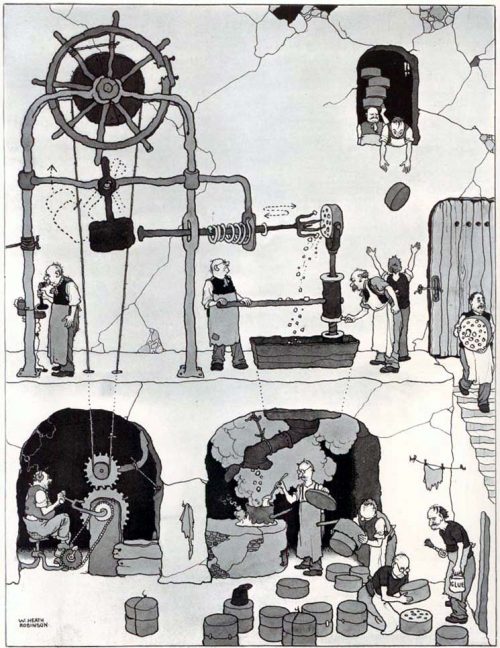 Paying tribute to the team of volunteer engineers who reconstructed the Heath Robinson, Andrew Herbert, chair of TNMOC, said, “After seven years of skilled work by TNMOC volunteers, the public can see a Heath Robinson working – for the first time! It is an incredible achievement, adding yet more life to the story of Lorenz codebreaking at The National Museum of Computing. Visitors can now see the original German cipher machines alongside working reconstructions of the whole of the deciphering process from intercept to decrypt.”

Like the historic machines throughout the Museum, the Heath Robinson original illustrations are protected by the newly installed Paessler AG PRTG environmental monitoring system.

The Heath Robinson machine and its links to Colossus

The Heath Robinson machine was commissioned by the Newmanry which under Max Newman was attempting to automate codebreaking. The original machine was built mostly at the Telecommunications Research Establishment at Malvern. It became operational at Bletchley in June 1943 and was successful, but its limitations soon became apparent. It proved extremely difficult to keep its two tapes running in synchronisation, it required too many tape changes to tackle all but five of the Lorenz wheel patterns, it was not scalable and it required very high maintenance.

Tommy Flowers of the GPO laboratories in Dollis Hill, London, was asked if he could improve upon the Heath Robinson, but rather than modify it, Flowers proposed the development of Colossus to overcome the Heath Robinson limitations. Flowers’ use of valves in place of the synchronising tape on the Robinson was a vital breakthrough.

Even after the deployment of Colossus in February 1944, the Heath Robinson continued to be developed and used in tackling the Lorenz cipher. By the end of the war, two ‘Super Robinsons’ were operational and another two under development.

After the war, one Super Robinson went to Eastcote and was probably operational until 1950s. Further development after the war led to Colorob, a combination of Robinson and Colossus, which became operational in 1955.

The role of Colossus and D-Day – a talk at TNMOC

Heath Robinson Day at The National Museum of Computing