You are here: Home » SCI-FI London is back

Today the SCI-FI-LONDON FILM FESTIVAL 2019 launches its stellar 19th annual programme which will run from 15th May until 22nd May across London with eight days of amazing film, immersive experiences and more. It will showcase a fantastic lineup with 4 world film premieres, 11 UK film premieres, 11 world short premieres and 13 UK short premieres. It will host 17 features, 36 shorts and 7 VR shorts alongside its regular classic cult events such as the 48 HOUR FILM CHALLENGE and SCI-FIDO, the world’s only cosplay for dogs!

Opening this year’s festival on the 15th May at the Prince Charles Cinema is the UK Premiere of PERFECT– a film that sends us tripping into a science fiction world like no other. Directed by Eddie Alcazar (KUSO) it is unclear if the young man (Garrett Wareing) has committed the horrible crime, but his mother (Abbie Cornish) sends him to a luxurious retreat full of beautiful hedonistic people for therapy. He will receive an experimental treatment to cure his ills and discover his true self. His mother has been there, but does she want to help him become ‘perfect’? Frenetic editing, soul shocking set-pieces and some eye-popping animation by Kidmograph, PERFECT alternates between calm and chaos, and picks at themes of AI, genetic engineering and esotericism. With its super-heightened visuals worthy of Gasper Noe, production design that DAZED would find hard to beat and a stunning soundtrack by Flying Lotus, this is ALTERED STATES for the iGeneration.

The festival’s Closing Night on the 22nd May at Stratford Picturehouse is the World Premiere of THE RIZEN: POSSESSION directed by Matt Mitchell and starring Julian Rhind-Tutt, Sarine Sofair, Adrian Edmondson and Sally Phillips. In 1955, NATO and the Allied Forces conducted secret, occult experiments in a bid to win the Arms Race. They succeeded, but what they unleashed almost tore our world apart and sent a human through a portal to somewhere very alien. This was the story of THE RIZEN, our closing night premiere in 2017. Come forward to now, and a group of urban explorers is exploring the abandoned bunker. But will they and a private military unit sent in after them, become the final pieces in a 60-year plan to reopen a door that should have stayed closed. 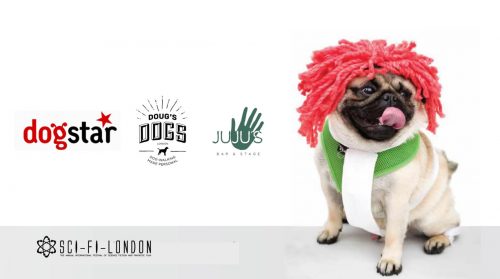 SCI-FIDO – THE WORLD’S, ONLY COSPLAY FOR DOGS EVENT, returns this year on Saturday 18th May outside the Prince Charles Cinema, Leicester Square, in association with DOGSTARPHOTO and ALL DOGS MATTER for the Crufts of Science fiction! Do you have a four-legged friend who likes to dress up as a sci-fi character? Or a pooch that looks like Princess Leia? Bring them along to our ‘dressed-up dog’ photo session!

Augmented, virtual, enhanced, trans or multimedia – it’s ‘mixed up’. A few brands have led the way – adding a VR thing here, an AR thing there – but does it make any difference and does this usual corporate approach get to the audience in a way that makes them care? #HACKSTOCK: 5 on the 16th – 18th May at festival’s secret HQ is our answer – bringing creators, makers, disrupters, artists, musicians, hackers, developers and you together in one place to talk it, think it, do it and play with it. And it’s Free! We have every flavour of headset – from cardboard to Magic Leap and a myriad of other toys to play with.

Other major Film Premiere Galas this year include the World Premiere of SHED OF THE DEAD, directed by Drew Cullingham, it’s darkly funny, gruesome and a little bit rude! Shaun of the Dead meets The Archers. Trevor (Spencer Brown) doesn’t really like gardening but has an allotment in which he spends his days avoiding his overbearing wife. Most of his time in his shed is spent painting figurines for wargames he plays with his friend, Graham (Ewen MacIntosh), both of them dreaming and arguing about their gaming alter-egos.

Celebrating its World Premiere, AFTER WE LEAVE is a brilliant début for director Aleem Hossain, a vibrant script, satisfying special effects and outstanding performances – the type of film this festival searches for every year.

Another World Premiere is THE TANGLE, a brilliant sci-fi noir written and directed by Christopher Soren Kelly and stars Jessica Graham (Crazy Bitches) and Nicole Da Silva (Wentworth)
In the near future, the TANGLE, an AI with airborne nanotech, connects the world. The Tangle is benevolent; it has stopped crime, keeps us well and safe. But to make sure it never turns rogue a government agency watches over them from within technology safe rooms, locations impermeable to the nanobots that make up the Tangle. When field agent Margot Foster is found dead in one of these rooms, the agency needs to investigate the first murder in years.

Also having its world premiere is ZOO-HEAD, directed by Navin Dev. With the aesthetic of TRAINSPOTTING and the weirdness of GROUNDHOG DAY, this is a strong debut from Dev, with great performances and awesome techno soundtrack to boot. Charlie is a zoo-head, a slang term given to junkies addicted to a powerful hallucinogenic that has memory munching side-effects. Squatting in a foetid apartment and existing on benefits, Charlie is a mess, and it is about to get worse. The Social Service is forcing the long-term unemployed to under-go radically experimental treatment to get them ‘normalised’; the only danger would be to zoo-heads. Charlie gets called in and lies about his situation, and so begins his treatment.