You are here: Home » King Donald and his dog 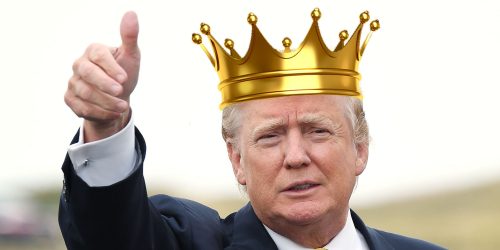 Another Trump inspired post here. This time I’ll be talking about a 1998 film, Wag the Dog, and compare it to what the 45th US President could do if someone in the administration had a brain as well as watching the movie.  I’ll also be talking about other films that are related that came out in the days of President Clinton.

The film is an analogy to the Clinton administration, as with Primary Colors. Both cover an election but with a scandal that could derail the campaign. In this post’s case I will just be talking about Wag the Dog.

If you haven’t seen the film just stop here as I’m going to be talking about the film & comparing it to what the current occupant of 1600 Pennsylvania Avenue is doing to try and deflect, in this case incredibly badly, all of the bad press that he is generating due to his administration’s incompetence.

Let’s step back to the phrase itself. It comes from the one that says “tail wagging the dog“. It’s similar to “put the cart before the horse“. In this case the phrase, according to Merriam-webster ( I can’t find it on the OED’s website )

In this case the president starts a non-existent war in Albania so he can get a boost as well as having the “other issue” ignored by the press. Not only is he aiming to get a boost because he is fighting a war that can be won. not only that, won at the right time just before the polls open.

Now, let us jump forward 20 years to the current day. America now has a c-list reality TV star on the throne. It’s first mad king America has had since the 18th century.  It seems that this new king is trying to become one of the tin-pot dictator’s that he seems to admire over the leaders of places like Canada or the UK.  Places that have always, well some not as always, been friendly & helpful to the United States.  The fact that has seemed to have bypassed the brain of this “leader”. 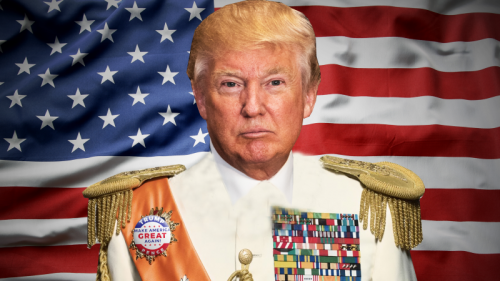 Back to deflections. Our King Donald has a lot to try and deflect at the moment.  From ripping immigrant families apart and then misplacing the same children to his ongoing legal issues.  What he is trying to do, and is working for his red hatted cultists.  Everyone else sees easily through the smokescreen of “blame Hilary” or “blame Obama” as they did made up things a lot worse than America’s mad King actually does.

That is his tried and tested method of his deflection technique that didn’t work a year ago and now it just sounds like an old man on his porch shouting at the pigeons.  On the other hand his madness doesn’t have seemed to have hurt his base of the under-educated and America’s golden heartland of farmers.  At least the latter are getting an “aid package” because of Trump’s “trade wars are easy to win“, incompetent, trade policies.

I’ll finish this off by saying if trump does try the “Wag the Dog Strategy”, he’s going to be the first American President, in modern times, to actually drop support because of a war.  Bush Jr or Trump’s friends, when he was a Democrat, the Clintons both saw spikes in their popularity after starting wars against the country’s enemies.  Especially if he does this, I’ll guarantee you it’ll be a bigger disaster than Vietnam & Iraq rolled into one.

Our Brand is Crisis