You are here: Home » Iranian Artist and Filmmaker Pooneh Hajimohammadi Turns Art into Activism with Latest Digital Exhibition, ‘Portrait of a Sinner’ to be Sold as NFTs 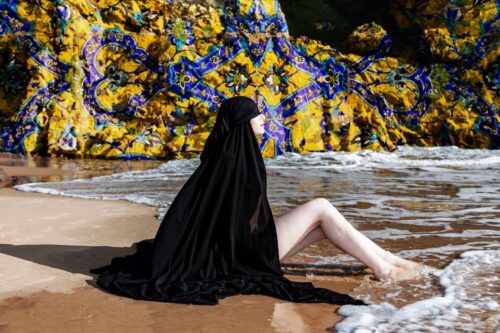 Today artist and filmmaker Pooneh Hajimohammadi is thrilled to announce that her latest exhibition, ‘Portrait of a Sinner’, is to be debuted and sold as NFTs via digital art app, Foundation – the modern marketplace for creators to auction their digital art. View her exhibition here.

Using blockchain technologies, NFTs (Non-Fungible Tokens) have offered artists like Pooneh Hajimohammadi artistic autonomy and the opportunity to show their work without censorship, in a way that could reach a global audience while protecting their IP.

‘Portrait of a Sinner’ is a collection of pieces that unify for a singular cause – the rights of women in Iran. Variations of these digital artworks were once too dangerous to show in Hajimohammadi’s home country and the aggressive censorship of expression forced her to leave Iran. Now living in the UK, her hauntingly personal and poignant collection is receiving its first exhibition on Foundation’s platform.

Completing her latest exhibition during the UK’s recent series of lockdowns, Hajimohammadi has long strived to illustrate the plight of Iranian women, the removal of their rights and erasure of the self. She deftly turns art into activism in ‘Portrait of a Sinner’, exploring themes of censorship, sexuality and religion – drawing from her own experiences growing up in Iran.

Pooneh Hajimohammadi said: “Blockchain is the tool that artists like myself have been looking for all of our lives. I grew up in Iran, where censorship of thought, feelings, and art is so systematic and enforced with such violence and terror that it seems insurmountable. Until blockchain, there was also another form of censorship – one of wealth. Gatekeepers decided who could be an artist, who was worthy of making a living from their work. And those lucky enough to be chosen had to give up money and rights to middlemen and kingmakers. I’m thrilled to be on Foundation and to have a censorship-free, egalitarian space to express myself. My collection, ‘Portrait of a Sinner,’ is about growing up as a woman in Iran.”

“For a woman to venture outside the safety of her home in Iran is to venture into a world full of rules. You can’t laugh loudly because a woman should be seen and not heard. They shouldn’t sing or dance; they shouldn’t enjoy nature or the weather. A woman shouldn’t have too many skills. Shouldn’t be sexual or confident about her body – she should be ashamed of it and hide it. She shouldn’t talk to the boys, or complain, or disobey them. It seemed that a woman’s place was to raise a family and make themselves ready for life after death. To live a life like this is to deny a big part of who you are. With this collection of photographs, I have tried to express how this feels and how it warps a women’s sense of herself. It exists on blockchain forever, and it is free for anyone in the world to see, and available for anyone to own.”

After graduating with top honours as a ‘Master Director’ from Tehran University, Artist/ Writer/Director Pooneh Hajimohammadi starred as an actress in popular TV shows like ‘Khane Dar Tariki’ and ‘Mazrae Kochak’ and the feature films ‘Aroosak Farangi’ and ‘Hidden Half’. At their peak, her TV shows reached a weekly audience of 30 million Iranian households and many more across the Arab world.

Her success as a TV actress enabled Pooneh to pursue her passion projects in art, theatre and film.However, these projects led to conflict with the state-controlled minister of culture. Her popular theatre productions were raided for being too provocative, and she and the rest of the cast had to flee to avoid arrest. A photo of her shaking hands with the head of a European film festival led to a year-long work ban in Iran. Frustrated at her inability to pursue her art in her own country Pooneh decided to leave for the UK. She is now living and working in the UK.

She is co-owner of Fever Dream Films, which has made a TV pilot for NBC Universal & Syfy and a feature film at development at Skydance. Pooneh has had roles in UK features ‘The Machine’,’ Don’t Knock Twice’, and the Kurdish Film, ‘Words with Gods’, which screened at the Venice Film Festival. During lockdown she starred in ‘A Temporary Story’, a feature film by Romed Wyder. Her first feature film as writer and director, ’Portrait Of A Sinner’, will be shot on location in Kurdistan in October, with co-producers Alexander Dumreicher-Ivanceanu of Amour Fou and Bahman Ghobadi of Mij Films.

British Filmmaker aims to sell all 130,000 frames of debut film Lad: A Yorkshire Story as NFTs in industry first

What is behind Van Gogh’s Sunflowers?