You are here: Home » Federal Health Agency… An affordable dream?

Like most of the rest of the world when you read a tweet from the current American President, Donald Trump, you wonder what’s the idiot trying to deflect from this time.  This time it was one about the Affordable Care Act, or “Obamacare” as people like Trump call it.  It was designed as an insult but that method didn’t stick but it sure does confuse his red hatted cult followers.

This was the rant today about it being UNCONSTITUTIONAL – Well, it seems that the bits that Trump and the GOP put in to cripple this great act are the unconstitutional and by a partisan, Texan, judge.

As I predicted all along, Obamacare has been struck down as an UNCONSTITUTIONAL disaster! Now Congress must pass a STRONG law that provides GREAT healthcare and protects pre-existing conditions. Mitch and Nancy, get it done!

Wow, but not surprisingly, ObamaCare was just ruled UNCONSTITUTIONAL by a highly respected judge in Texas. Great news for America! 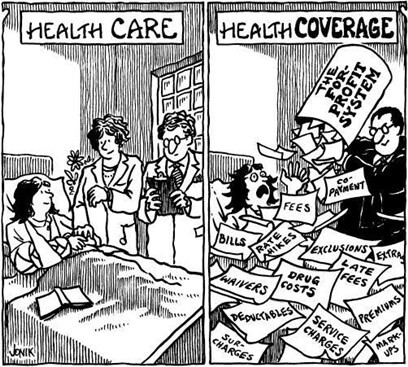 Here in the UK we have the National Health Service.  It’s not perfect but it does mean that we are protected from “the cradle to the grave“.  It’s not a cheap service but having to pay medical insurance for 66 million people is hard.  On the flip side, it cost only $4,246 per person compared to the $10,224 that it costs per American.

Here in the UK , we have this evil socialist system of healthcare that seems so alien to some members of the US House and Senate.  Some want a “Medicare for all“.  This would still involve people paying for this out of their own pocket or at least that what I get from Bernie Sander’s website.

I would suggest a change from that idea.  To a more regulated system.  One that could be taken out of a paycheck.  Sort of a percentage of your taxes that go into a giant pot that hospitals, and people who can’t afford the current price of healthcare can dip into and can he healed.

You could even still allow private insurance.  It works here in the UK.  It still gives you the chance to choose if you want to “risk” the public health system or stay with what you are used to.  Paying over the odds for medical treatment and medication.

Please America sort out your healthcare so people don’t die because they can’t afford their insulin so they have to ration it or just because you’re in the wrong place at the wrong time and get shot by a terrorist?

Finally, just stop calling universal healthcare socialist.  It seems to be an evil word for you.  For us this side of the pond it indicates some compassion and caring for others in their time of need & not how to get a quick buck out of someone that’s gravely injured.