You are here: Home » Shazam! set to topple Dumbo this weekend at Box Office 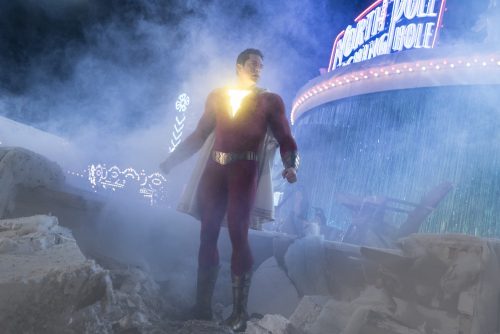 DC’s efforts to move away from the gritty Snyder/Nolan style of cinema and into more family friendly waters seem to have paid off. According to Applaudience, the cinema data experts, the superhero franchise’s newest venture, Shazam!, is going to top this weekend’s Box Office, with a predicted gross of £3.4m

Shazam! has managed to pre-sell 53,000 tickets, (average ticket price of £10.82), totalling £580K in pre-sales, giving a forecast of £3.4m this weekend. This will just nudge Dumbo off the top spot, and will put them ahead of other new releases, Paramount’s Pet Sematary and Entertainment One’s Peppa Pig: Festival of Fun, as well as Marvel’s latest superhero blockbuster, Captain Marvel.

In addition to this, based on five different models Applaudience have used, which factors in variables such as holidays, and the weather, they forecast that the Top 10 Box Office Movies this weekend are:

Last week was the maiden forecast of Applaudience has been met positively and upon analysis, was very successful.

The top 5 films at the Box Office were forecast in the correct order; Dumbo, Captain Marvel, Us, Fisherman’s Friends & What Men Want.

The warm weather was certain to have impacted ticket sales last week, especially for the family friendly Dumbo and this is something that Applaudience will be looking to factor more into their forecast moving forward, for increased accuracy.

Katniss is the Queen of the UK cinema