To celebrate the launch of Netflix’s new blockbuster RED NOTICE, Hollywood superstar and Wrexham A.F.C. co-owner Ryan Reynolds surprised the Welsh market town with an exclusive first look at the film ahead of its public release.

Watch as Ryan hijacks some precious RED NOTICE promo time to take viewers behind the scenes and introduce a few of his favourite Wrexham acquaintances, including the Mayor of Wrexham, Councillor Ronnie Prince; the players and Wrex the Mascot at his beloved Wrexham A.F.C.; and legendary local bakery EmzCakes. He even gets a helping hand from Welsh ex-footballer and pundit Robbie Savage, who has a special message for Ryan’s RED NOTICE co-stars ‒ Dwayne “The Rock” Johnson and Gal Gadot.

The activity follows hot on the heels of Ryan and co-owner Rob McElhenney’s recent trip to watch Wrexham play their first home game since taking over the club. Working closely with local manufacturer and Wrexham A.F.C shorts sponsor, Ifor Williams, Netflix mounted a giant cinema screen to the back of a specially designed Ifor Williams trailer, screening an unseen clip from the film for the assembled crowds. The trailer, on a trailer, made its way around town, stopping at treasured local landmarks and businesses, the football club and even the Mayor’s office. 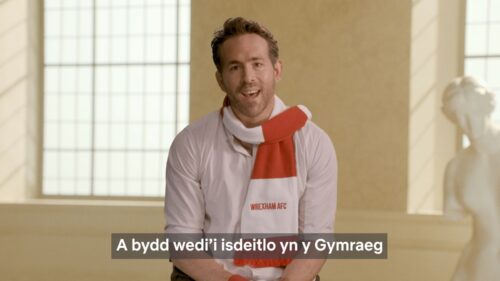 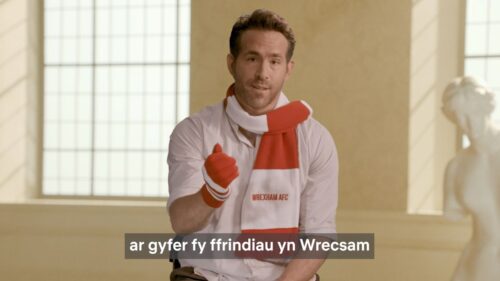 (translation: Ryan Reynolds’ new film Red Notice is available to watch with Welsh subtitles for the first time ever)

Speaking of the special preview, The Mayor of Wrexham, Councillor Ronnie Prince said “If you’d told me 18 months ago that Wrexham would be singled out to get an exclusive first look at a Hollywood blockbuster with 3 of the biggest movie stars in the world, I’d never have believed you”.

Rob Small, Head of Sales for the Ifor Williams Trailers Group of Companies, added: “We were delighted that Netflix chose an Ifor Williams LM187 tri axle trailer, manufactured at our Deeside factory, to professionally mount an enormous screen. We had the honour of watching a clip from RED NOTICE and, I can assure you, I will be watching this film when it’s released. Ryan Reynolds is a star to the Wrexham fans in many ways – go Ryan!”

When an Interpol-issued Red Notice — the highest level warrant to hunt and capture the world’s most wanted— goes out, the FBI’s top profiler John Hartley is on the case. His global pursuit finds him smack dab in the middle of a daring heist where he’s forced to partner with the world’s greatest art thief Nolan Booth in order to catch the world’s most wanted art thief, “The Bishop”. The high-flying adventure that ensues takes the trio around the world, across the dance floor, trapped in a secluded prison, into the jungle and, worst of all for them, constantly into each other’s company.

Is 6 UNDERGROUND the most Michael Bay movie ever bayed?

Ryan Reynolds and the 6 Underground trailer