In line with the launch of new Netflix film Eurovision Song Contest: The Story of Fire Saga, starring Will Ferrell and Rachel McAdams as a fictional Icelandic pop duo, musicologist Dr Joe Bennett (Professor of Professional Music, Berklee College USA) has analysed over 250 songs from the past ten years of Eurovision to discover the characteristics that attract the most votes in the contest. 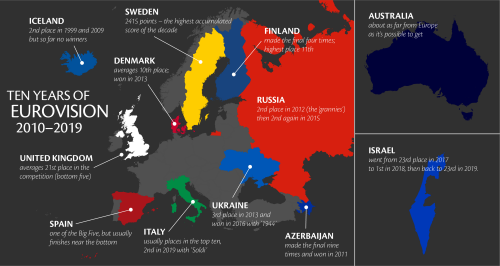 The findings have further been applied to songs from the cancelled 2020 Eurovision Song Contest to better understand who would have fared best this year.

The 2020 contest in Rotterdam did not go ahead due to the global pandemic, so to make up for the lack of real-world voters, the researchers listened to these 41 entrants and added some comments and scores of their own.

Full commentary on the 2020 Eurovision Song Contest can be downloaded here, with a summary of predicted points below:

Eurovision Song Contest: The Story of Fire Saga tells the story of aspiring Icelandic musicians Lars (Will Ferrell) and Sigrit (Rachel McAdams) who are given the opportunity of a lifetime to represent their home country at the competition. The film features a range of different original songs from their old-school crowd-pleaser Ja Ja Ding Dong through to their eventual entry Double Trouble.

Musicologist professor Dr Joe Bennett says, “Ja Ja Ding Dong is a classic example of old-school Eurovision Schlager – an oompah singalong tune with nonsense words and a happy sentiment. It might have done well in the 1970s, but in modern Eurovision it would almost certainly bomb.” Whilst of their eventual entry, Double Trouble, he says “[in real life, it] is good enough to be a finalist, but we wouldn’t see it winning.”

However, he admits that fictional Russian entry Lion of Love (the favourite to win in the film) may well fare the best, saying “at 140BPM it’s at the upper end of the successful tempo spectrum, and the lyric metaphor might be a bit too much for some voters, but we agree it would do well.”