You are here: Home » Netflix is taking their hugely popular video series “I Like to Watch” on a live tour of the UK

Thursday, Sundowners Bar in Margate played host to the first stop on Netflix’s live tour of their hugely popular video series I Like to Watch. In front of a sold out audience, RuPaul’s Drag Race UK winner The Vivienne and Cheryl Hole accompanied by up-and-coming local Queens Delilah Tickles and Amy Redmond, watched and hilariously critiqued Netflix’s He’s All That in their trademark scandalous style.

The fantastically camp tour which brings the show’s outrageous humour live to LGBTQ+ venues across the country will now hit the road and visit Bournemouth, Nottingham, Glasgow and Swansea, before a final stop in Hull on October 20th.

Travelling between cities in a fabulously flamboyant kitsch motorhome fit for our Queens, the venues will be given an I Like To Watch living room-style makeover, immersing attendees and bringing them closer to the action than ever before.

Each night of the tour is hosted by a rotating cast of fan favourites, including RuPaul’s Drag Race UK winner The Vivienne, Tia Kofi, Cheryl Hole and Tayce, who will be partnered with up-and-coming Queens, local to each of the venues. Fans will get up close and personal with our Queens, watching and critiquing films including Pitch Perfect, Netflix’s Eurovision Song Contest: The Story of Fire Saga and He’s All That in their own unique style.

After a year in which venues and drag artists saw their industry struggle tremendously with work disappearing overnight due to the COVID-19 pandemic, the I Like To Watch tour is an opportunity to celebrate and support LGBTQ+ performers and the venues which act as a vital resource for the community.

“I’m so excited to be taking I Like To Watch on the road” says The Vivienne. “We’ve all had a shocker over the last year or so, and queens and LGBTQ+ venues have really struggled. I’ve made a career working in bars all over the UK, so I know how vital they are to our community. We want to give everybody a camp time, but fingers crossed our tour can help local scenes as they start to find their feet again.” 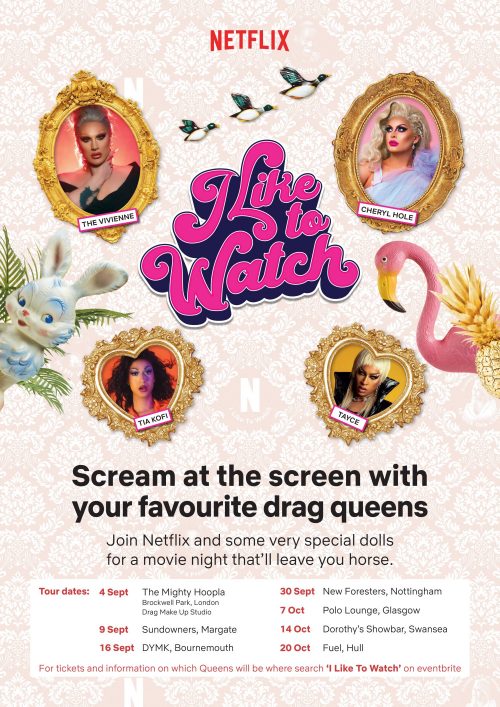 Tuesday Afternoon Kitchen is coming back