You are here: Home » Lucca Comics & Games to go ahead in-person

To rebehold the stars: light is the claim of the 55th year of Lucca Comics & Games festival happening in person from 29th October to 1st of November 2021 in Italy. 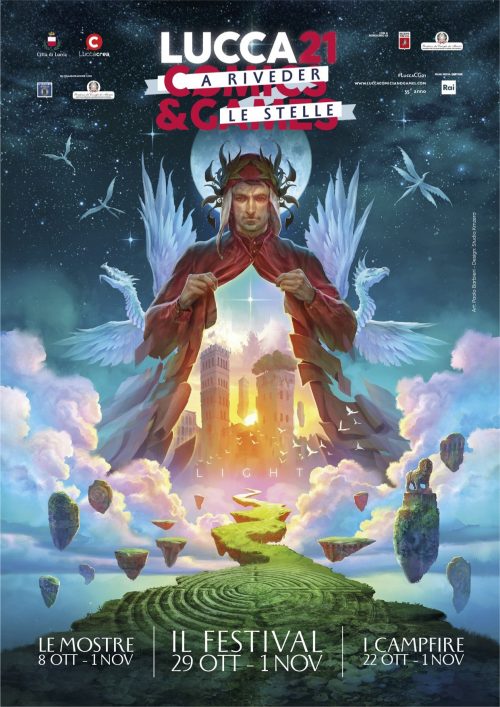 This year Italy is honouring Dante Alighieri, the poet and philospher, by celebrating the 700th anniversary of his death and Dante’s Divine Comedy sets the tone for the returning festival – a community event that not only produced culture but creates a place where people can share experiences by occupying and interacting with and within a unique and monumental city. Light is the synthesis of this new Lucca Comics & Games, which signals a passage from dark to light, and paves a road to a new kind of normal. Visitors will go back to meeting creators of universes that have been an integral part of the festival – comics, games, storytelling, modern mythologies and big and small industries represented in these worlds.

“Lucca Comics & Games is a unique cross-media event dedicated to pop culture, cosplay and comics held in a medieval Tuscan town. Before the pandemic, each year more than 250,000 fans walked through our city walls to immerse themselves in a world of fantasy. Our organisation has worked very close with government to implement safety rules. We are delighted to be able to open our gates again after a year of darkness. “Thence we came forth to rebehold the stars” is the last line in Dante’s Inferno. To me it means a new beginning and the hope that we will again be able to embrace our imagination and experience an unforgettable live event.” says Emanuele Vietina, Director of Lucca Comics & Games.

THE FESTIVAL RECONQUERS THE CITY

Lucca Comics & Games returns to the heart of Lucca, Italy, offering the public the chance to find the most beloved publishers and exhibitors in historical areas and in places to (re)discover: the central core of comics will remain Piazza Napoleone. The iconic pavilion has is coming back together with Palazzo Ducale and the historical spaces of the Palazzetto dello Sport, where the festival was held until 2005 and returns this year for the first time in 15 years. The world of gaming will be housed in the Real Collegio and in the Cavallerizza area Japan World will conquer the large spaces of the Polo Fiere di Lucca. The Music & Cosplay area will be hosted in the San Francesco complex. All these worlds will be increasingly interconnected within the Festival: visitors will be invited to travel from one to the other, to enrich their passions and rediscover the pleasure of being in Lucca.

The theme of Light will visually accompany the Festival experience with contemporary Italian illustrator Paolo Barbieri, creating the distinctive image of Lucca Comics & Games poster. In the year of Dante’s celebrations, he creates the poetic vision that links Lucca Comics & Games to Dante’s journey with Virgil through the darkness of Hell. The artist visually tells the story of the Festival’s adventurous journey, with its colourful paraphernalia of cosplayers, dragons and spaceships married to the literary and mythological forces that live in Dante’s poetry.

Paolo Barbieri says “I decided to draw a road suspended in the sky that leads us towards Dante who, opening his red robe, reveals a fantastic Lucca opening up to receive the Festival. This grassy road, suspended in the midst of other flying rocks leads to the realm of fantasy with Lucca understood as a true door of the Imagination which I have tried to recreate in my own way to convey the sense of wonder in Dante’s myth.”

Suspended between theatrical performance and costume craftsmanship, the cosplay world finds its home within the evocative Villa Bottini, an architectural masterpiece of Lucca. The frescoed rooms and the garden will host some of the most interesting communities, including Assassin’s Creed Cosplay, Terre di Mezzo Cosplayer, Ghostbuster Italia, Avengers / X-Men and 501 Italica Rebel/Legion Empisa. There will also be space for medieval fantasy, steampunk, the post-apocalyptic world of The Walking Dead, the universe of Harry Potter and the magic of Disney. Dozens of characters will come to life, animating Villa Cosplay, with professional photoshoots, workshops and wardrobe services, to enjoy the Festival in complete safety. The San Francesco Auditorium will host the long-awaited Cosplay Competition on Saturday 30 October: backstage interviews, behind-the-scenes footage and lots of fun for what has always been considered one of the unmissable events of Lucca Comics and Games.

Test your pop-culture knowledge with this interactive Christmas challenge!

Looking back at Lucca Comics & Games 2019