You are here: Home » Women in films & Alison Bechdel

Not that long ago I got an email about a new female led science fiction film, Beyond Existance. It does look good but it needs your help to get it finished and into the cinema.

This post isn’t about that film precisly but it does link to it. It mentions something called the Bechdel test. A test I wasn’t aware of so off to Wikipedia I went and discovered what it was. It’s a simple test to measure of the representation of women in fiction. It only has 3 rules and they are quite simple.

According to the OED, the test is slightly different as the definition shows:

An informal method of evaluating whether or not a film or other fictional work portrays women in a way that marginalizes them or which exhibits sexism or gender stereotyping.

For a work to pass the Bechdel test, three criteria must be satisfied:

Thinking about the 3 rules. It can be meaningless as it doesn’t do anything to, correctly, show women in fiction. The test can be passed quite easily in any film.

All you need is a scene, let’s set it around a pool. Put two female characters in it.

According to Mark Harris, and as mentioned above in the OED definition, they should have names instead of “Bimbo 1” & “Bimbo 2”. If we apply that non-standard rule we can then call them Sarah & Samantha.

Make them topless ( why not as it’s a male director making the film ) and have them talk about the best make-up to wear whist going for a swim. Bingo! A short scene that is in there just to make it pass the test so you can flop it on the poster and publicity ( if anyone knew about the test).

However, if we apply the more stringent OED definition ( it can’t show sexism or gender stereotyping ) then these topless bimbos, sorry Sarah & Samantha can have a conversation about physics. They’re still topless by a pool but now they’re not talking about something stereotypically female.

This cartoon also shows the pointlessness of the rule as well.  If you try and do the same for male roles. 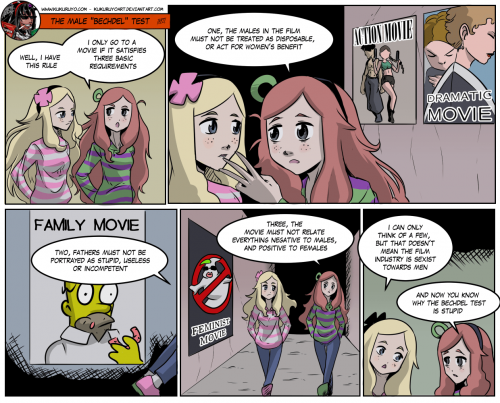 What do Men Want?