You are here: Home » What could happen when Les Dennis & Anthony Head break into your house?

Munro Film is excited to share the brand new trailer and poster for their latest star-studded comedy, Sideshow, which will be coming to cinemas across the UK from 19th November.

The film follows two criminals who after breaking into the home of a washed-up psychic, get much more than they bargained for, because ‘The All-Seeing Stupendo’ is a genuine master of the dark mystic arts – at least that’s what it says on his poster and he’s sticking to it… 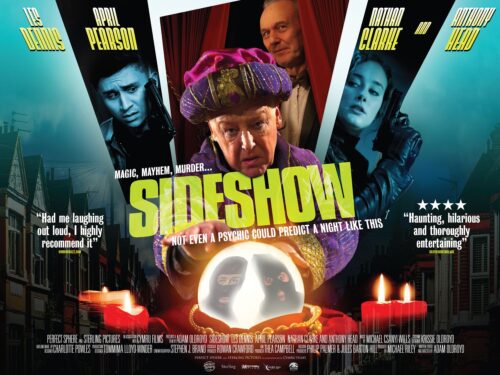 Featuring hilarious performances from British legends Les Dennis and Anthony Head as well as April Pearson and Nathan Clarke this film is sure to get audiences laughing.

Commenting on the release writer & director Adam Oldroyd said “Sideshow is my modern take on the black humour of the old Ealing comedies. Les was the perfect pick to play ageing psychic Stuart Pendrick, his years of experience as one of the nation’s best-loved entertainers was the ideal material to draw from”

What will your nightmares produce?