You are here: Home » The Rock rocks Count Me In

Quintessential music documentary celebrating the world of drumming, Count Me In, including contributions from the drummers of Queen, Red Hot Chili Peppers, Foo Fighters, The Police and Pink Floyd, was recently released on demand to acclaim with The Rock praising it as: “Easily one of the best docs I’ve seen in a very long time – HIGHLY recommend.” 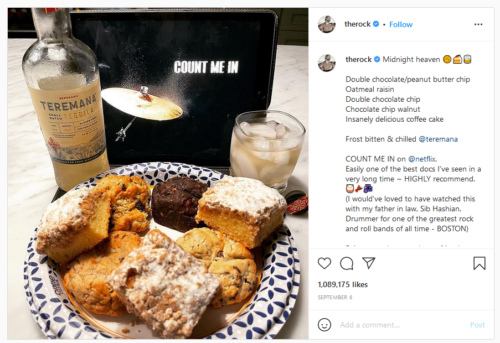 Drummers featured in the film include Roger Taylor, Stewart Copeland, Taylor Hawkins, Nick Mason, Chad Smith and Cindy Blackman Santana, which celebrates the deep passion of drumming and exhilaration of a life dedicated to driving the beat.

The film takes viewers on a journey with some of the greatest, most respected players and personalities from the world of drumming. It explores their beginnings, influences and inspirations though conversation, concert footage, original content and concludes with a thrilling drum off. Count Me In beautifully communicates the energy, art and skill of the drummers who have shaped some of the most iconic music of the 20th and 21st centuries.

Directed by Mark Lo and produced by John Giwa-Amu, Count Me In is edited by Andrew Hulme, previously known for his work on the BAFTA-winning The Imposter, with additional editing by Claire Ferguson (Eyes Wide Shut, Concert for George) and David Fairhead (Armstrong, Spitfire). Giwa-Amu’s Good Gate Media and Lo’s Asylum Giant produced, with Jim Reeve and Robert A. Halmi Jr from Great Point Media serving as Executive Producers on the project. The film also pays homage to the legends who influenced the star drummers featured in the film.

Director/Producer Mark Lo said, “We’re very excited to be able to share the journey we took with these amazing players; celebrating the passion and joy of playing and communicating through drums.”

Producer John Giwa-Amu said, “Count Me In’s a film that brought some of the most talented musicians in the world together to create some genuine moments of magic. We’re really proud to have it premiere on Netflix.”

Lo began his career as a musician. During his tenure, working with music publishing company, Cutting Edge and has received a number of Executive Music Producer credits. His filmography includes the multi-Oscar-nominated Carol, The Railway Man, starring Colin Firth, and the critically-acclaimed Belle.

Giwa-Amu and Lo’s next collaboration will be a five-part celebration of music’s power to connect people, which will be packed with a range of A-list music talent.

Biggie and Pop Village decide to go after Poppy