You are here: Home » Prime Video Unveils the Key Art for its French Amazon Original Movie I Love America 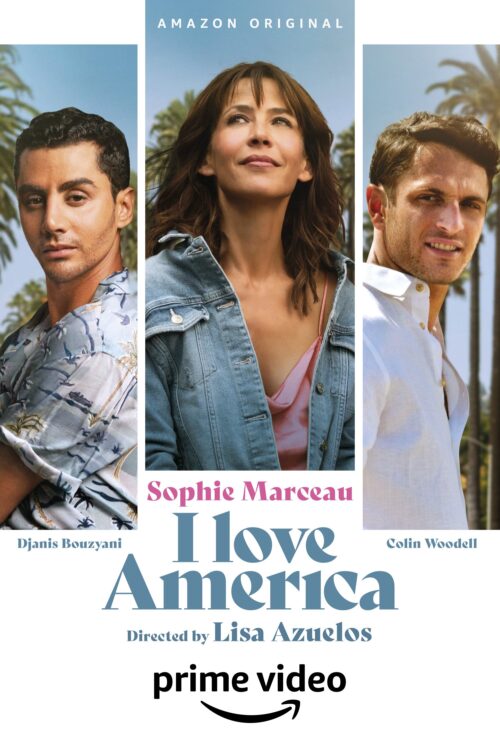 Prime Video audiences will be invited to jump into the adventures of Lisa (Sophie Marceau), a single woman who decides to take a chance on love again by catapulting her life from Paris to Los Angeles. Her children flew the coop and her famous, yet absent mother just passed, so Lisa needs a big change. She reunites with her best friend Luka (Djanis Bouzyani), who found success in America with his iconic drag queen bar but is struggling to find his own prince charming. Luka embarks on a mission to give Lisa a fresh start by creating a profile for her on a dating website. From awkward dates to a surprise encounter with John (Colin Woodell), Lisa will understand that the journey to love is a journey towards herself and forgiveness of her first love: her mother.

I Love America will join the thousands of TV shows and movies in the Prime Video catalogue, including hit movies like The Tomorrow War, Coming 2 America, Golden Globe winner and Academy Award nominee Borat Subsequent Moviefilm, the Golden Globe and Academy Award nominated movies One Night in Miami and Sound of Metal; and critically-acclaimed global Amazon Original series including Tom Clancy’s Jack Ryan, The Boys, Homecoming and The Marvelous Mrs. Maisel, all available on Prime Video at no extra cost for Prime members.

Prime Video’s The Lord of the Rings: The Rings of Power First Official Teaser Trailer Debuts During Super Bowl LVI

Prime Video’s The Lord of the Rings: The Rings of Power officially has a name and it hints at what’s to come.

Tuesday Afternoon Kitchen is coming back