You are here: Home » MAXIMUS by HH

XVII. VII. MMXIX, Londinium: MAXIMUS by HH is THE essential fragrance for the modern sandal and toga wearing citizen seeking to make a statement this Summer.

Revitalise your essence immediately with the authentic alluring Roman elixir of youth, strength and passion.

Exude power and confidence with a bold and powerful oil-based fragrance steeped in history.

Stand out in the crowd as the robust and distinct aroma announces your presence. When people ask, just tell them, “It’s MAXIMUS by HH.” 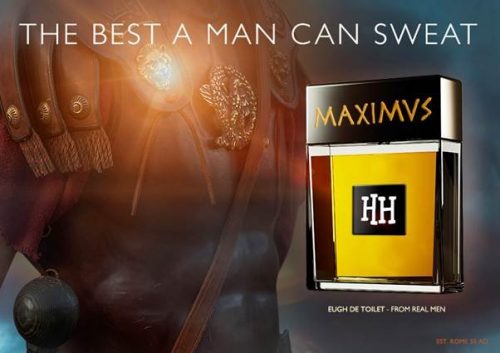 “I wanted to gift the people of Rome something that embodies the strength and fetor of my courageous gladiators. Not only will MAXIMUS by HH challenge the senses and transform your ageing skin, but the superior essence will also transport you right into the gladiatorial arena itself. Whether you’re at work or at play, with MAXIMUS by HH you too will feel as fearsome and ferocious as those contenders whose scent you wear.” – Emperor Nero (37-68 AD)

The Tradition of MAXIMUS by HH

Scraped distilled from the brawny, strapping (and sometimes dead) bodies of Rome’s most glorious Gladiators and bottled in delicate flacons, MAXIMUS by HH contains C% highly concentrated natural ingredients rich in vitality and the height of luxury.

Apply AM, Noon, PM and Midnight.

Hold your breath and apply liberally to your face. For best results really drench it. Close your eyes and be transported back to the gory glory of Rome.

Here’s what some of our customers are saying about MAXIMUS by HH.

“Mee-Ow! MAXIMUS by HH is animal magnetism in a bottle.” – Jean Paul Fartier
“People totally die for this stuff. What’s wrong with that?” – Dita Von Wees
“I love MAXIMUS by HH. It’s expensive and I’m worth it.” – Victorious Beckham
“What’s that god-awful smell? It’s MAXIMUS by HH is what it is.” – Jimmy Poo

Everything you need to know about the Justice League Team