Created in partnership with US artist Cloe Hakakian and recreated by Sophie Meseg at Graffiti Life, the ALITA: BATTLE ANGEL-inspired, AR-enabled Manga Wall is to mark this week’s Home Entertainment release and the beloved manga that inspired it. 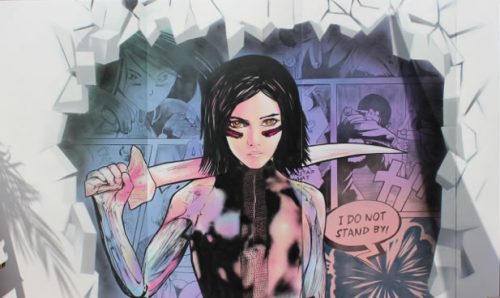 The Manga Wall, which will appear at London Film & Comic Con 2019 from Friday 26 – Sunday 28 July at London Olympia, features a photo opportunity to help fans dive into Alita’s world with the hashtags #AlitaBattleAngel and #IDoNotStandBy, as well as a custom Facebook AR lens that quite literally brings ALITA: BATTLE ANGEL special feature material to life through the screen of your smartphone.

Created in celebration of this week’s release of ALITA: BATTLE ANGEL on Digital, 4K Ultra HD + Blu-ray™ 3D, Blu-ray™, and DVD, the Manga Wall is not to be missed at this year’s London Film & Comic Con.