The BFI London Film Festival in partnership with American Express is delighted to announce that this year’s Closing film will be the biopic AMMONITE, directed by Francis Lee, starring Kate Winslet and Saoirse Ronan and produced by See-Saw Films. The film will receive its UK premiere on Saturday 17th October and will be available to UK audiences at cinemas across UK who will also enjoy a virtual introduction from Lee and key cast. 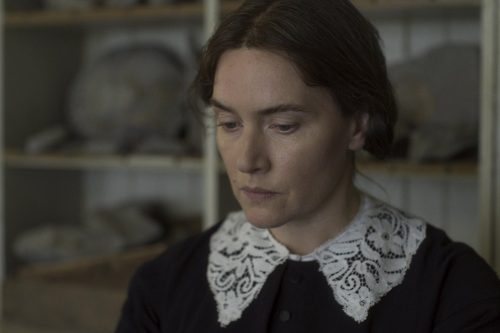 In the 1840s, acclaimed self-taught paleontologist Mary Anning works alone on the wild and brutal Southern English coastline of Lyme Regis. The days of her famed discoveries behind her, she now hunts for common fossils to sell to rich tourists to support herself and her ailing widowed mother. When one such tourist, Roderick Murchison, arrives in Lyme on the first leg of a European tour, he entrusts Mary with the care of his young wife Charlotte, who is recuperating from a personal tragedy. Mary, whose life is a daily struggle on the poverty line, cannot afford to turn him down but, proud and relentlessly passionate about her work, she clashes with her unwanted guest. They are two women from utterly different worlds. Yet despite the chasm between their social spheres and personalities, Mary and Charlotte discover they can each offer what the other has been searching for: the realisation that they are not alone. It is the beginning of a passionate and all-consuming love affair that will defy all social bounds and alter the course of both lives irrevocably.

Both a heartfelt love-story and an examination of gender, class and society, AMMONITE brings to life in vivid detail the life of a woman unappreciated in her own time. A pioneering paleontologist and passionate fossil collector, Anning’s findings contributed to changes in scientific thinking around the prehistory of the Earth and saw her named as one of the most influential women in British scientific history by the Royal Society after her death.

AMMONITE Director, Francis Lee said: ‘I’m thrilled AMMONITE has been chosen to close the BFI London Film Festival. In these incredibly difficult times, it’s wonderful to see this film about intimacy, love and hope getting its U.K. premiere at LFF’

The film is co-financed by the BFI (awarding National Lottery funding) and BBC Films. See-Saw Films developed the film with the BFI and BBC Films. The BFI’s relationship with Lee goes back to 2015 with his hugely successful debut, God’s Own Country, which received development and production funding. The film is produced by Iain Canning, Emile Sherman and Fodhla Cronin O’Reilly.

BFI London Film Festival Director, Tricia Tuttle said: “We were huge admirers of Francis Lee’s debut and it’s a pleasure to have him close the 2020 BFI London Film Festival with his sublime second feature, AMMONITE. Francis has the ability to place love stories of breath-taking intimacy within a rich socio-political context, always with a delicate touch, and here offers reflections on class difference and the erasure of women from scientific history. In Saoirse Ronan and Kate Winslet, AMMONITE features two enthralling and gifted leads; Kate in particular, who appears in almost every scene, gives a fearless and complex performance as the brilliant, proud Mary Anning”.

AMMONITE is one of thirteen other highly-anticipated new films from the programme that will screen in previews across the UK, in partnership with UK-wide cinemas network, offering audiences across the UK a unique chance to engage with the Festival. The previously announced MANGROVE will open this year’s 64th BFI London Film Festival. Many of the films will also screen in the Festival’s Virtual Festival home on BFI Player, with over 55 new feature films from around the world premiering on the digital platform over the course of the BFI London Film Festival.

AMMONITE will be released in UK cinemas in 2021.

The 64th BFI London Film Festival in partnership with American Express takes place from Wednesday 7th October-Sunday 18th October 2020. The full Festival programme will be announced at an online launch on Tuesday 8th September 2020 and all tickets will be bookable from Monday 21 September 2020.

Mary, Queen of Scots has a trailer