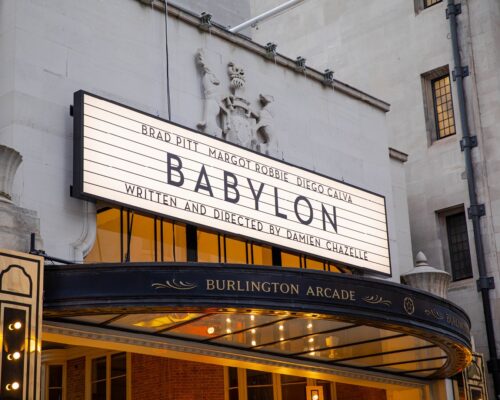 Paramount Pictures Babylon, in cinemas January 2023, has partnered with London’s iconic Burlington Arcade, the renowned historical shopping destination, to bring the magic of the highly anticipated film release Babylon to life with an interactive experience celebrating the timeless era in which the film is set. The installation which decorates the entire length of the 196- yard arcade and launched last night (13th November) and will run until the end January 2023.

Burlington Arcade was a favourite shopping destination for the stars in the 1920’s who used to visit the Arcade’s glamorous boutiques to find unique creations. These include jewellery from Ciro Jewellery, who have been in the Arcade since 1917, when it was trading under its sister company name of Kane Lane; and from S.J.Rood, another jeweller which had been in the Arcade since 1863. S. J. Rood remained trading from their Burlington Arcade location until the end of the century when, in 1998, they were bought out by Hancocks & Co. who took over their premises and have remained there ever since. To this date, the Arcade has retained its position as one of the key retail destinations in London where to find a unique luxury offering and this partnership will bring once more the magic of the “Golden Twenties”.

Designed by Amanda Davis, the interactive experience will give visitors the chance to transport themselves to experience the magic of Babylon and discover the wide range of classic inspired items on offer from some of the brands in Burlington Arcade. As part of the partnership, a Babylon pop-up boutique within the Arcade will showcase some of the costumes and content from the film.

Burlington Arcade will become the most festive destination in London and will be unveiling an extensive Christmas programme of activities for everyone to enjoy as well as the best of Christmas shopping within a historical backdrop all decorated with the Babylon installation.