You are here: Home » British Filmmaker aims to sell all 130,000 frames of debut film Lad: A Yorkshire Story as NFTs in industry first

Today Filmaker Dan Hartley has launched a new website which will give film fans the opportunity to purchase unique film frames as NFTs. His production company Rogue Runner, who are behind the lockdown sleeper hit Lad: A Yorkshire Story, has today confirmed that all 130,000 frames of their film will be available to be purchased as NFTs via the new platform, Rubric.

This is the first time that fans will have the opportunity to own a piece of celluloid history and then be able to trade these assets as their rarity increases their value. This is also the first time that an entire film has been made available in this way and each frame sold will be uniquely numbered and only one copy will ever exist.

The film itself, Lad: A Yorkshire Story, which was released in 2013, was overlooked by distributors upon its initial release and became a sleeper hit in 2021 when it was released through Amazon Prime, gathering over 500,000 streams to date. 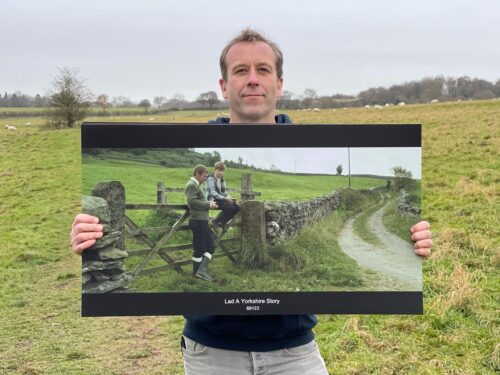 Filmmaker Dan Hartley was delighted to announce the launch of Rubric, saying “What we’re seeing in filmmaking is exactly that which we saw in the music industry, in which the tiny percentages shared by the streaming giants mean only the biggest actors can survive, so we want to broaden the options available to the filmmaker by giving them a platform to create their own merchandise so that smaller more personal stores can continue to thrive.”

“The aim of Rubric is two-fold; To empower content creators to keep ownership of their media as part of a new revenue stream and to give audiences the opportunity to become stakeholders in films they love and to then have the opportunity to trade these assets as rare and unique collectibles.”

‘”I see NFT’s as a huge game changer in the industry, on the same scale as home video and I think they will start to play a prominent role in the way that films are funded and distributed and I want Rubric to be at the forefront of that.”

Lad: A Yorkshire Story will be coming to My5 early 2022 and NFT film frames are available to purchase at rubric.media

Iranian Artist and Filmmaker Pooneh Hajimohammadi Turns Art into Activism with Latest Digital Exhibition, ‘Portrait of a Sinner’ to be Sold as NFTs