You are here: Home » A Chiara has a new poster & trailer

MUBI, the global distributor and curated film streaming service is pleased to release a new trailer and poster for Jonas Carpignano’s third and final part to the Calabrian trilogy A Chiara, coming to UK cinemas on 15 July 2022, followed by an exclusive streaming release on MUBI on 26 August 2022.

A gritty contemporary neo-realistic depiction of a remote region of Italy, A Chiara had its World Premiere at the 2021 Cannes Film Festival where it won the Europa Cinemas Label as Best European film in the Directors’ Fortnight section. A Chiara also claimed Best International Feature Film at the 2021 Zurich Film Festival, the David di Donatello Award for Best Actress and received three nominations at the 2021 Film Independent Spirit Awards including ‘Best Feature’. 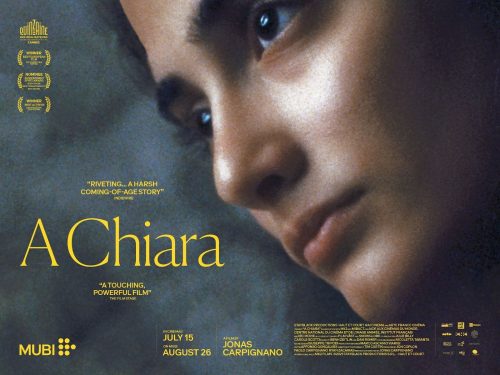 The Guerrasio family and friends gather to celebrate Claudio and Carmela’s oldest daughter’s 18th birthday. There is a healthy rivalry between the birthday girl and her 15-year-old sister Chiara as they compete on the dance floor. It is a happy occasion, and the close-knit family are on top form. However, everything changes the next day when the father disappears. Chiara starts to investigate. As she gets closer to the truth, she is forced to decide what kind of future she wants for herself.

A Chiara follows Carpignano’s earlier work with Mediterranea in 2015 which earned him the distinction of “Breakthrough Director” at the 2016 Gotham Independent Film Award, and later A Ciambra, also selected at Cannes for the Directors’ Fortnight in 2017 and represented Italy for “Best Foreign Film” at the 2018 Academy Awards.

What is Faya Dayi?

A Chiara is coming to UK cinemas