Apple TV+ today shared a first look at the highly anticipated second season of “Foundation,” the epic saga from storyteller David S. Goyer and produced for Apple by Skydance Television, and revealed new cast that will star alongside Emmy Award nominees Jared Harris and Lee Pace in the new season. 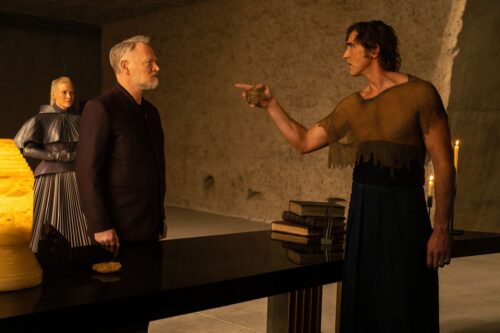 Based on Isaac Asimov’s award-winning stories, and featuring an international cast led by Harris and Pace, alongside rising stars Lou Llobell and Leah Harvey, the monumental adaptation of “Foundation” chronicles the stories of four crucial individuals transcending space and time as they overcome deadly crises, shifting loyalties and complicated relationships that will ultimately determine the fate of humanity. The Apple Original drama also stars Laura Birn, Terrence Mann and Cassian Bilton.

New stars joining the cast of “Foundation” for season two include:

“Foundation: The Official Podcast,” a companion podcast to the drama series, is produced by Pineapple Street Studios with Max Linsky, Jenna Weiss-Berman and Bari Finkel serving as executive producers, with the entire first season now available on Apple Podcasts at https://apple.co/FoundationPodcast.

Tehran is coming back to Apple TV+ for a second season