You are here: Home » Winners announced for the 2019 Nespresso film talents competition

First place was awarded to Aaron Wheeler who created a truly moving interpretation of the meaning behind the famous British dish, Fish and Chips titled, Better Together. The two runners up prizes were awarded to Andrew Coleman for his thought-provoking Food for Thought and Zeta Spyraki for a moving piece about the meaning of Olive Oil.

This year, Nespresso Talents challenged these filmmakers to share what food meant to them, through the theme of WE ARE WHAT WE EAT with the competition receiving over 300 entries from around the world. Each winner will not only receive funds for their film career but also an exclusive trip to the 2019 Cannes Film Festival, where the selected videos will be formally announced and celebrated on May 17th, 2019. The three authors of the selected videos will also receive mentoring sessions in Cannes with Semaine de la Critique. 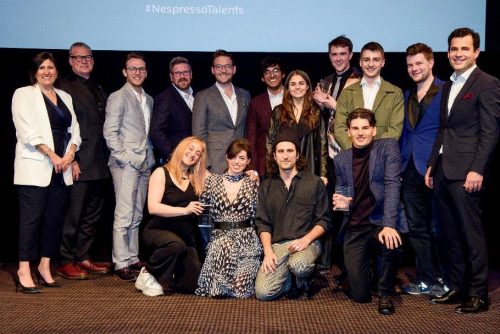 Other shortlisted films this year included: A Cautionary Tale of Corpulence by Yoshi Steiner about the dangers of greed and over-indulgence; Streets of London by Magdalena Kunz, Kaya Kunz and Caroline Koziol highlighting the plight of the UK homeless and how the Western world wastes over 1.3 billion tonnes of food each year; A Truly Moveable Feast by Ruth Newton about travel and the connection between food and culture; Rosemary by Emily Munster about the powerful properties of herbs, particularly in terms of stress management, and how food connects us to the earth; Food: Make It, Be It, Crave It by Taylor Gorske about what food means to individuals; Life’s Recipe by James Cragg and Tautvydas Baranauskas about food as an expression of human creativity and inspiration and Just Food by Ben Yates and Myles Pereira about how food is more than just food but a way to bring people together and express love for those around you.

The Nespresso Talents platform aims to inspire filmmakers to create positive change in the world and to celebrate filmmaking talent globally. The contest brief also taps into cultural trends by offering a new storytelling perspective using the vertical format – a way of viewing videos which has already grown exponentially in the last years. Alfonso Gonzalez, Nespresso Chief Customer Officer explains: “Nespresso seeks out people who think differently, who are prepared to go further, push boundaries and demonstrate creativity in what they do. For this reason, we are proud to support film events, with a focus on young talent and innovation in film.”

Nespresso Talents continues to push the boundaries of traditional filmmaking by asking that all submissions are in a vertical format (9:16), giving entrants a chance to explore their creativity through a completely new perspective.