You are here: Home » What is The Big Meeting?

Shut Out The Light is thrilled to celebrate the UK Premiere of THE BIG MEETING in UK cinemas on 6th September 2019.

Every second Saturday in July the city of Durham is taken over by miners, trade-unions and the public for a major event known locally as THE BIG MEETING. The Durham Miners’ Gala is an annual celebration of noise, colour and solidarity, of class culture, creativity and endeavour. Attracting 200,000 people, banners and brass bands parade through the streets to honour their heritage. THE BIG MEETING reflects the past, present and future of the Gala and labour movement, whilst following four protagonists over the course of this impressive working-class occasion. 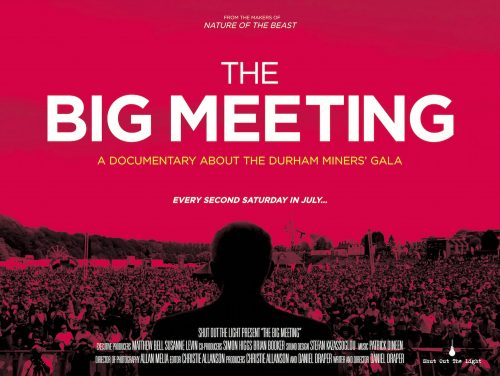 In December 2017, Shut Out The Light’s documentary about Labour stalwart Dennis Skinner, ‘Nature of the Beast’, played to a sold-out audience at Redhills – The Miners’ Hall in Durham. Having filmed at the Gala for Nature of the Beast and exposed to the history and aura of Redhills, Shut Out The Light approached the Durham Miners’ Association (DMA) about the possibility of making the first official feature-length documentary about the Gala. Shut Out The Light received unprecedented access to the Gala, allowing them to capture it from all angles.

2019 marks the 150th anniversary of the DMA making the timing of this documentary particularly relevant. 55 years since the first documentary on the Gala, THE BIG MEETING offers a fascinating look into the world’s most significant annual public meeting.

Director, Producer and Writer Daniel Draper said: “Visiting and filming the Gala in 2016, I was exposed to the colour, noise and environment for the first time. It’s something I’ve struggled to articulate into words to people ever since. I don’t think words can do justice to such an occasion – I feel like the Gala is a living and breathing organism, something not static, but immovable – a celebration of working-class life, not just today, but almost as if it takes place in the past and future simultaneously. I suppose this film is an elaborate explanation of something wonderful and beyond words.”