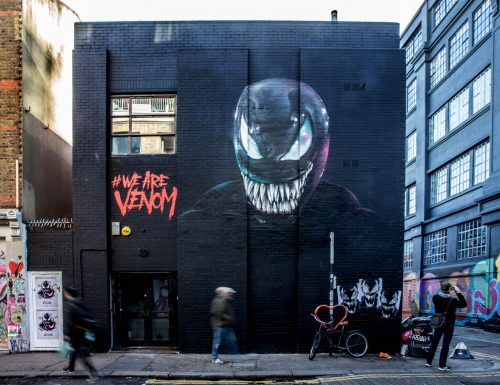 INSA’s work is held in the V&A collection and has been presented at the Tate Britain. Outside of the UK, INSA has left his mark in major cities around the world including; Tokyo, LA, New York, San Francisco, Luxembourg, Lisbon, Hong Kong, Berlin and Brussels.

The term GIF-ITI was coined by INSA when he started creating his unique animated paintings. Created over 5 days, the installation captures the transformation of Eddie Brock (played by Tom Hardy), into the ferocious anti-hero VENOM!

The evolution story of Marvel’s most enigmatic, complex and badass character – Venom!

Eddie Brock is a broken man after he loses everything including his job and fiancée. Just when his life is at its lowest, he becomes host to an alien symbiote which results in extraordinary superpowers – transforming him into Venom. Will these powers be enough for this new lethal protector to defeat great evil forces, especially against the far stronger and more weaponized symbiote rival, Riot?

© 2018 CTMG, Inc. All Rights Reserved. **ALL IMAGES ARE PROPERTY OF SONY PICTURES ENTERTAINMENT INC. FOR PROMOTIONAL USE ONLY. SALE, DUPLICATION OR TRANSFER OF THIS MATERIAL IS STRICTLY PROHIBITED.

A Sentinel in London