You are here: Home » Mural inspired by Alexander McQueen unveiled in East London

A beautifully captivating and striking mural of a newly designed skull was today unveiled in the heart of East London, inspired by the notoriously fearless and rebellious designer Alexander “Lee” McQueen.

The mural is on display for the public for one week only (until midnight on Wednesday 31st October), which has been erected to not only mark the release of the critically-acclaimed documentary McQueen on DVD, BLU-RAY™ and COLLECTOR’S EDITION, but also to inspire and encourage up-and-coming artists to showcase their skillset and raise their public profile.

As a self-described “unremarkable” working-class boy from East London, Alexander McQueen was extremely creative, harnessing his personal demons to create a darkly stunning fashion brand and become one of the most iconic artists of the century. He was notoriously known for provoking and subverting the fashion industry in ways that often-caused controversy and scandal.

Graffiti Life – a collective of street artists with a mission to empower and inspire artists – frequently showcase their talents, partnering with big name brands on public art projects. Film contributor, designer, and nephew to the late Alexander McQueen – Gary James McQueen – collaborated with Graffiti life artist, Sophie Meseg, on the design of the mural, to champion young artistic talent, in the spirit of Alexander McQueen.

Sophie took Alexander McQueen’s signature skull motif seen in the film’s artwork (originally designed by Gary McQueen) and interjected her own personality into the design. Her intricately detailed spray-painting skills are evident in the 15.7ft tall mural which took Sophie two days to paint. Speaking at the launch, Sophie said: “For me it’s fun to paint on such a large scale, but I also love that street art is a unique platform to engage with an audience. It’s been an amazing opportunity to work on this design in collaboration with such an incredible designer, Gary McQueen, and I’m super excited to bring this piece to life, along with my colleague Gioele. I hope it does encourage other artists to be creative to push to get their talents noticed”.

Gary McQueen was thrilled to be part of the project, commenting: “Sophie is an extremely talented designer and spray-paint artist. I’m thrilled to support her in launching this mural and encourage as many people as possible to come down to Shoreditch and see for themselves just how truly talented Sophie is.”

DJ, Fashion Icon, and Blogger Zoe London attended the mural’s unveiling to celebrate the film’s release, stating: “Alexander McQueen is such an icon of authenticity in the fashion industry, and when I heard that Graffiti Life were unveiling an incredible mural inspired by the McQueen documentary, I had to come down and check out the work for myself. I’m blown away by the detail and it’s such a stunning tribute to McQueen here in East London. It was a real pleasure meeting the artist Sophie as well – the mural is truly spectacular, it’s inspired me to want to go home and pick-up a paint brush!”

The mural can be found on Ebor Street in Shoreditch (just off Shoreditch High Street) until midnight on 31st October in honour of McQueen on DVD, Blu-ray™, and Collector’s Edition now. 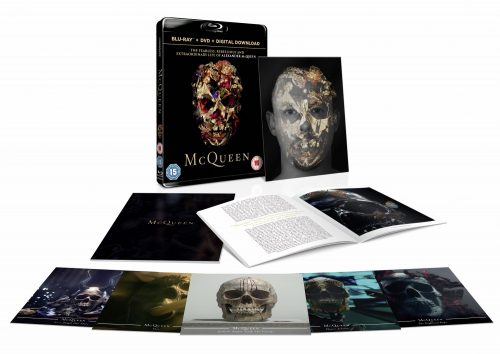