You are here: Home » The Cold Blue is flying into UK cinemas

Chronicling the heroic struggles of the Eighth Air Force during World War II, who flew B-17 Bombers over Europe, the film features rediscovered and meticulously restored raw color footage found in the national archives from the 1944 documentary Memphis Belle: A Story of a Flying Fortress, directed by the legendary director William Wyler.

A meditation on youth, war and trauma, The Cold Blue is a tribute to one of the world’s greatest filmmakers, his cameraman Harold Tannenbaum – who perished in combat while filming – and the men of the Eighth Air Force, who flew mission after lethal mission during the Air War. 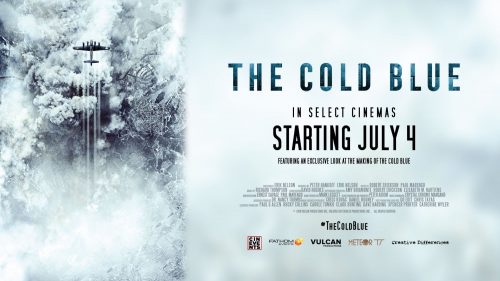 “This project was a labour of love that has been three years in the making, from the discovery of William Wyler’s original footage to working closely with the National Archives to restore it frame by frame,” said The Cold Blue director Erik Nelson. “We’re excited to finally share this special project with audiences and to celebrate the last of the best — the men who risked their lives to save the world 75 years ago.”

“My father would be amazed and delighted that the aerial footage he and his camera crew shot in such terrifying conditions is having a new life and new audiences 75 years later,” said The Cold Blue executive producer Catherine Wyler. “Erik Nelson’s new work captures the danger and the courage required of our airmen in the battle over Europe.”

The film features interviews with nine of these surviving veterans, whose voices narrate the harrowing world that Wyler and his cameramen captured in the summer of 1943. The immersive theatrical experience also includes an original orchestral score from celebrated musician and composer Richard Thompson (Grizzly Man), and sound design by David Hughes (Black Panther).

“We are delighted to be working on this important and timely project. Cinema is the perfect venue to appreciate this compelling film, and it is a fantastic opportunity for CinEvents to showcase the Second World War from a truly unique perspective in cinemas across Europe”, MD of CinEvents, Joe Evea comments.

“The Cold Blue is a first-of-its-kind documentary, which reinvents the visionary work of one of our greatest American directors to create an entirely new film,” said Fathom Events CEO Ray Nutt. “Fathom is proud to give this documentary a showcase fit for its technical feats, historical importance and beautiful storytelling — on big screens worldwide.”