You are here: Home » Jim Morrison is coming home

Oliver Stone crafted a psychedelic and powerful musical portrait that brilliantly captured the furious energy of the 60s and the myth of The Doors’ iconic front man, Jim Morrison – the man whose music shaped an era. 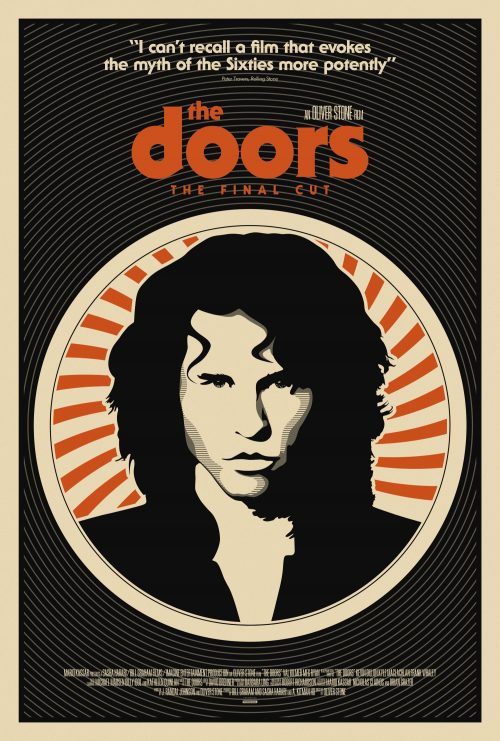 Two decades later, STUDIOCANAL presents a stunning new 4K restoration – THE DOORS: THE FINAL CUT– supervised by Oliver Stone and brought to life with Dolby Atmos®, that will take audiences back in time, into the world and sound of the psychedelic 60s.

“This brand new 4K restoration of THE DOORS in Dolby Atmos® will provide far greater overall clarity and dimension for the audience. During the many concert sequences, the sound now fills the auditorium above the audience, behind it, and all points in between. I wanted the film to be as immersive as possible to a real 60s Doors experience” said director Oliver Stone. “Additionally, I’ve made one cut of 3 minutes to a scene I thought was superfluous to the ending, which helps close out the film in a more powerful way.”

Remastered from the original negative that was scanned in 4K 16-bit on Arriscan at EFILM US, the restoration was managed by Imagine Ritrovata in Italy with the close support of Oliver Stone who oversaw the colour grading. The Dolby Atmos® mix was created at Formosa Group under the supervision of Dolby and of the original sound editors of the film: Mr Wylie Stateman and Mr Lon Bender.

This new mix will offer audiences a unique, immersive experience of the amazing film soundtrack, which includes over twenty-five songs from The Doors back catalogue.

Jean-Pierre Boiget, head of Distribution Services at Studiocanal, adds: “We are delighted to have collaborated closely with Mr Oliver Stone on this fantastic restoration: his personal involvement at each step of the process was crucial to give the audience the best technical and creative output as possible. The extraordinary technologies of our times will allow to audience to live, like never before, an awesome experience of O​liver Stone’s legendary film and of THE DOORS’ mythic music.”

THE DOORS: THE FINAL CUT will be screened in 4K for the first time in Cannes at the Cinéma de la Plage (Movies on the Beach) during Cannes Classics, before a limited theatrical run via Carlotta in France starting on June 26th.