You are here: Home » The Book of Vision now has a trailer & poster

The official trailer and artwork by Lorenzo Ceccotti for The Book of Vision, from Carlo S. Hintermann, launches today. His debut feature film opens the 35th Venice International Film Critic’s Week in Italy on September 3rd 2020.

The art was created by Lorenzo Ceccotti, aka LRNZ, the Concept Visual Designer of the film.

“With this film I tried to capture and isolate the transcendent and immanent vision of nature, which swarms outside and inside the body, always changing like the soul. For a visual artist, telling timeless stories is at the same time a great challenge formal and honesty, but also a very rare opportunity. I can, therefore, only be grateful for being considered capable of presenting such a profound, complex and rich work” says LRNZ. 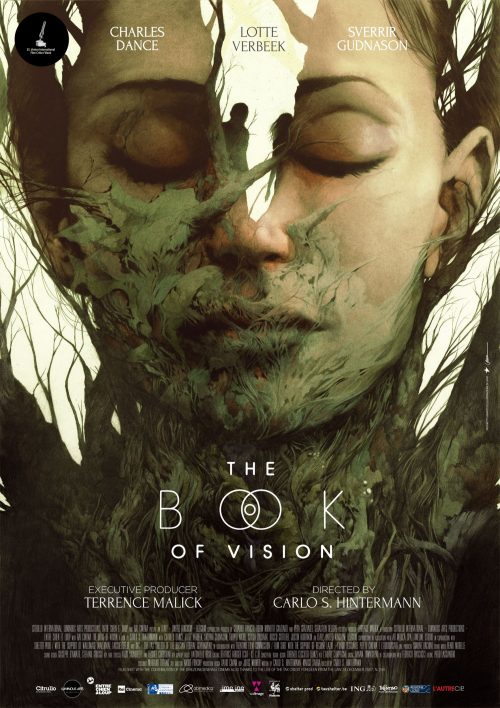 Eva, a promising young doctor, leaves her brilliant career to study History of Medicine in a remote university. Now is the time for her to call everything into question: her nature, her body, her illness, and her sealed fate. Johan Anmuth is an 18th-century Prussian physician in perpetual conflict between the rise of rationalism and ancient forms of animism. The Book of Vision is a manuscript that sweeps these two existences up, blending them into a never-ending vortex. Far from a proper scientific text, the book contains the hopes, fears, and dreams of more than 1800 patients. Dr. Anmuth truly knew how to listen to his patients, whose spirits still wander through the pages, life and death, merging in a continuous flow. The story of Anmuth and his patients inspire Eva to live her life to the fullest. Nothing expires in its time. Only what you desire is real, not merely what happens.

The official trailer, co-produced with Entre Chien et Loup (Belgium) and Luminous Arts Productions (UK) with Rai Cinema and the support of the Directorate General for Cinema and the Province of Trento, can be captured the visionary atmospheres and the suggestive settings in extraordinary locations. The film’s artistic, aesthetic and productive value is extremely high, starting from executive producer Terrence Malick and bearing the signature of industry excellence such as photography by Joerg Widmer, one of the most celebrated European directors of photography, David Crank, considered one of the most talented American set designers and Mariano Tufano who has curated the costumes, winner of the David di Donatello in 2007. Music is by Hanan Townshend in collaboration with Federico Pascucci.

UglyDolls go for a spin