You are here: Home » The Apparition is upon us

The engrossing and thought-provoking mystery thriller THE APPARITION is released in UK cinemas on 3rd August.

Staring Vincent Lindon (The Measure of a Man, Mea Culpa) and Galatea Bellugi (Heal the Living) THE APPARITION is directed by Xavier Giannoli (Marguerite). 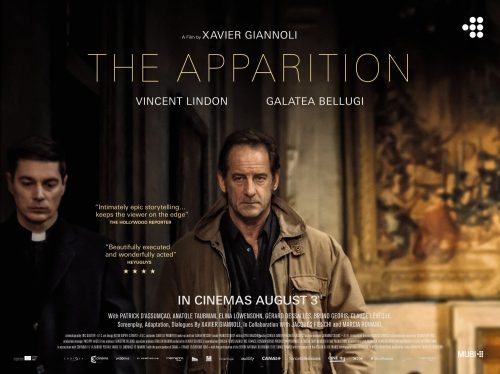 Jacques is a war reporter working for a large French newspaper. His reputation as an impartial and talented investigator attracts the attention of the Vatican who recruit him to take part in a committee investigating the truth behind a saintly apparition in a small French village.

On arrival in the town, Jacques meets the young and sensitive Anna who claims to have personally witnessed the apparition of the Virgin Mary. A profound devout, she’s gathered an impressive following in the village and is torn between her faith and the many solicitations she receives. Confronted with opposing views from clergy members and sceptics, Jacques begins to uncover the hidden motivations and pressures at work and sees his beliefs system profoundly shaken to the core.

The Scribe is listening in