You are here: Home » See more of Peterloo 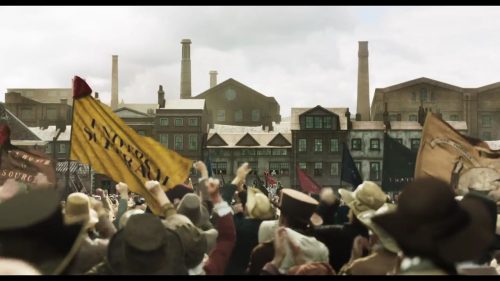 ENTERTAINMENT ONE have launched a new poster & trailer for PETERLOO, the shocking true story of the 1819 Peterloo massacre.  Not only that, we can also show you a brand new set of images as well.

The trailer is quite short at only a minute long.  On the plus side it does give a nice cut-down version of what we’re going to be seeing.

The film will receive its UK premiere at the 62nd BFI London Film Festival in partnership with American Express® at HOME in Manchester on Wednesday 17th October. The premiere will be broadcast live to cinemas nationwide and will be followed by a Q&A with director Mike Leigh.

The screening represents the first time the BFI London Film Festival has premiered a film outside of the capital, offering audiences in Manchester and nationwide the opportunity to preview a major release with Manchester’s history at its forefront.

An epic portrayal of the events surrounding the infamous 1819 Peterloo massacre, where a peaceful pro-democracy rally at St Peter’s Field in Manchester turned into one of the bloodiest and most notorious episodes in British history. The massacre saw British government forces charge into a crowd of over 60,000 that had gathered to demand political reform and protest against rising levels of poverty. Many protestors were killed and hundreds more injured, sparking a nationwide outcry but also further government suppression. The Peterloo massacre was a defining moment in British democracy.