You are here: Home » What happened at Peterloo 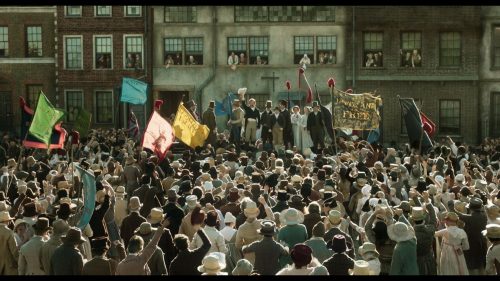 Something that happened almost 200 years ago is becoming a Mike Leigh film. A riot that is still echoing down the ages because of the government response. Subdue the protesters with rifle fire!

This is what happened one day in St Peter’s Fields in Manchester England.  This event went down in history when the newspaper’s of the time called it, ironically, the Peterloo massacre ( after the battle of a similar name ).  Not only did it give us this name but it also helped to form one of the oldest papers in England.  The Manchester Guardian ( better known now as just The Guardian )

WE have been sent over the first, teaser, trailer as well as a nice set of images.

An epic portrayal of the events surrounding the infamous 1819 Peterloo Massacre, where a peaceful pro-democracy rally at St Peter’s Field in Manchester turned into one of the bloodiest and most notorious episodes in British history. The massacre saw British government forces charge into a crowd of over 60,000 that had gathered to demand political reform and protest against rising levels of poverty. Many protestors were killed and hundreds more injured, sparking a nationwide outcry but also further government suppression. The Peterloo Massacre was a defining moment in British democracy which also played a significant role in the founding of The Guardian newspaper.