You are here: Home » Nae Pasaran! is coming to the UK 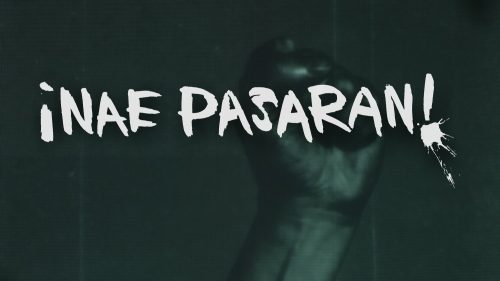 Debasers Filums and Cosmic Cat are thrilled to announce that Nae Pasaran! will be released in UK cinemas from 2nd November. The film is nominated for two BAFTA Scotland awards for Feature Film and Director – Factual.

Directed and produced by Felipe Bustos Sierra, 40 years after their defiant stand in protest against General Pinochet’s Air Force in Chile, Scottish pensioners discover the incredible outcome of their solidarity. NAE PASARAN! is the painstakingly-documented and emotional account of the impact of their action, and for the very first time, the feature film brings in the story of the many Chileans who crossed paths with the engines.

In 1974, factory workers at Rolls Royce East Kilbride in Scotland refused to repair and return the military jet engines of Pinochet’s Air Force, in protest against their use during the 11 September 1973 air raid on Santiago. The Chilean coup overthrew Salvador Allende, the first democratically-elected left-wing government in Latin America.

Bob Fulton, an engine inspector and WWII vet, put his job on the line to boycott any work on the Chilean engines. Backed by the entire workforce, Bob and his colleagues kept the engines in the factory yard, falling prey to the Scottish elements, for four years. One night the engines mysteriously vanished, leaving the workers to believe their actions were meaningless and unaware of the scale of their impact.

NAE PASARAN! tells the unlikely story of how a group of pensioners from East Kilbride became Commanders of the Republic of Chile.

The film celebrated its World Premiere at the Closing Gala of Glasgow Film Festival 2018.

Director & Producer Felipe Bustos Sierra said: “After six years of research and work, I’m delighted that Nae Pasaran! and its story of solidarity, compassion and persistence will be shared with audiences. The visceral reactions and fantastic word-of-mouth after each of our preview screenings highlighted how relevant these stories are today. It’s extra fuel to our fire and Bob, Robert, Stuart, John and myself are looking forward to support the film as it rolls out.”

Why is Omar stuck in Limbo?