You are here: Home » IT Chapter Two is coming home 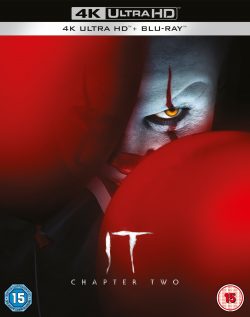 Evil resurfaces in Derry as director Andy Muschietti reunites the Losers Club in a return to where it all began with “IT Chapter Two,” the conclusion to the highest-grossing horror film of all time, on 4K Steelbook, 4K UHD, Blu-ray, DVD and Digital Download.

The film is Muschietti’s follow-up to 2017’s critically acclaimed and massive global box office hit “IT,” which grossed more than $700 million worldwide. Both redefining and transcending the genre, “IT” became part of the cultural zeitgeist.

The “IT Chapter Two” Blu-ray is a limited edition 2 disc Blu-ray that features over 90 minutes of additional content including the never seen before documentary ’The Summers of IT’.

The 4K Ultra HD Blu-ray disc of “IT Chapter Two” will feature Dolby VisionTM HDR, which dramatically expands the colour palette and contrast range, and uses dynamic metadata to automatically optimise the picture for every screen, frame by frame. It will also feature HDR10+TM, a new HDR technology that optimises brightness levels and contrast for each scene, making bright areas brighter and dark areas darker to deliver a lifelike viewing experience.

The 2-film collection of “IT” and “IT Chapter Two” will also be available on DVD, Blu-ray and digital download.

Fans can also own “IT Chapter Two” on digital download from December 30.

Twenty-seven years after the Losers Club defeated Pennywise, he has returned to terrorize the town of Derry once more. Now adults, the Losers have long since gone their separate ways. However, people are disappearing again, so Mike, the only one of the group to remain in their hometown, calls the others home. Damaged by the experiences of their past, they must each conquer their deepest fears to destroy Pennywise once and for all… putting them directly in the path of the shape-shifting clown that has become deadlier than ever.

Love with a book?

Who are the Losers’ Club?