Trains have always been a great setting for movies; the excitement of the journey, the thrill of the speed, the mystery of the strangers filling a carriage. All these elements and more are why filmmakers choose to use the mode of transport as a great setting for their story to play out.

To celebrate the release of upcoming thriller THE COMMUTER, starring Liam Neeson, Vera Farmiga, Patrick Wilson and Sam Neill, in cinemas January 19, we collated a list of the greatest train thrillers ever to hit the big screen. 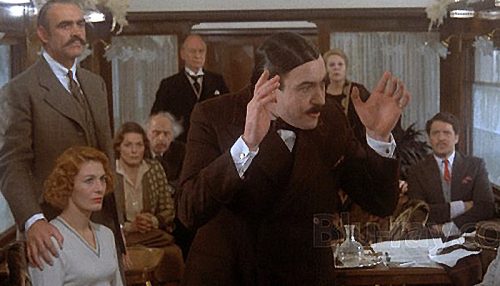 Infamous detective Hercule Poirot (Albert Finney) is tasked with solving the murder of a passenger on the luxurious Orient Express whilst travelling back to London. With twelve suspects in the carriage, all seemingly unconnected to the victim, the sleuth must interrogate and consider every possibility to solve one of his most challenging and enthralling cases.

When train conductor Will (Chris Pine) is partnered with veteran engineer Frank (Denzel Washington), the pair clash over old and new ideals of the job. However when a company exec informs them that a train nearby carrying toxic chemicals is running unmanned, they must join together to stop it before it crashes in a populated area, endangering thousands of lives.

New York is brought to a standstill when four men take passengers on a subway carriage hostage. Demanding $1 million from the mayor, the group state that they will kill a passenger every minute that the money is late. Wisecracking transit policeman Zach Garber (Walter Matthau) unwittingly becomes the communicator between the hijackers & the authorities and must try to stop the situation before anyone is killed, but a question keeps nagging at everyone involved – if the ransom is paid, how can the men possibly escape the subway tunnel?

A soldier (Jake Gyllenhaal) finds out that he is part of an experimental government programme when he wakes up in someone else’s body on a train heading into Chicago, only 8 minutes later a bomb goes off killing everyone on board. He discovers that his mission is to work out the identity of the bombers, as the same 8 minutes are reset over and over again. As he attempts to solve the mystery, he begins to wonder why he was selected for the task and whether he can make a difference to the fate of the passengers.

When two men meet by chance travelling to New York, they discuss their problems and come up with the perfect murder – that the strangers each kill off the other’s ‘problem’ so there are no ties to the murders. However whilst one of the men believes that this was a discussion in jest, the other goes ahead with the plan and begins pressuring his partner in crime to complete his side of the bargain too.

A woman (Vera Farmiga) sits down one day next to Michael (Liam Neeson), an ordinary commuter on his way home as usual, and gives him a seemingly simple task – find someone on board that doesn’t belong. The offer of money to complete this task is alluring and he agrees, but Michael soon discovers that he is now at the central of a criminal conspiracy where lives are on the line.