You are here: Home » The Greatest Showman hits Covent Garden 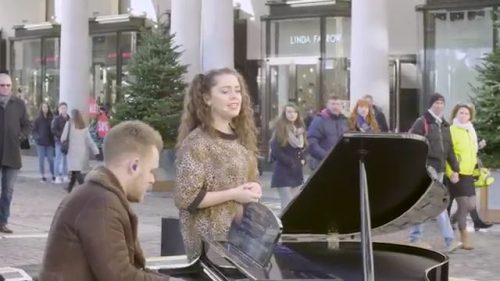 London’s Covent Garden came alive with the spectacle of THE GREATEST SHOWMAN as performers erupted into song and dance in celebration of the film’s forthcoming release. The group surprised and entertained passing shoppers and drew large crowds as they spilled out onto the iconic piazza and performed two of the film’s leading tracks; Golden Globe nominated ‘This Is Me’ and ‘The Greatest Show’.

Joining the fun were BRIT School graduates Ashley Glazebrook and Glen Murphy, better known as Twist and Pulse, who cite THE GREATEST SHOWMAN as “one of our favourite films EVER” and have previously created their own interpretation of the dance to ‘This Is Me’. The professional dancers/presenters, who have toured the UK and Ireland extensively and amassed 1.1 million followers online, abandoned their Christmas shopping to add their signature ‘streetomedy’ moves to some of the day’s performances.

In the mood for musicals? Catch some of your favourites across London with Pop Up Screens

The Greatest Showman has character posters