You are here: Home » Festive Filming Gets Underway For The Purrrfect Christmas Sequel ‘A GIFT FROM BOB’

Align, Twickenham Studios, and Producers Adam Rolston and Parkhouse Pictures are thrilled to announce that principle photography has commenced for A GIFT FROM BOB – the sequel to the international hit film A STREET CAT NAMED BOB and based on the international best-selling books. 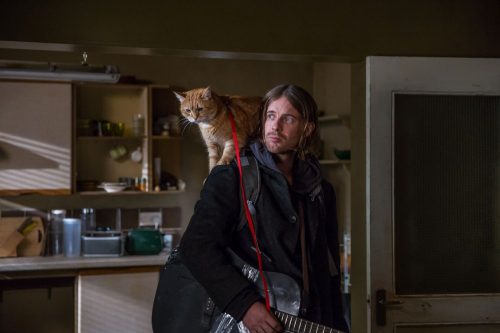 Luke Treadaway returns as James Bowen, and Bob the Cat (A Street Cat Named Bob) is returning as himself.

From the day James Bowen rescued a street cat abandoned in the hallway of his sheltered accommodation, they began a friendship which has transformed both their lives and touched millions around the world.

In A GIFT FROM BOB, James looks back at the last Christmas he and Bob spent scraping a living on the streets and how Bob helped him through one of his toughest times – providing strength, friendship and inspiration. Ultimately teaching each other about the true meaning of Christmas spirit along the way.

A GIFT FROM BOB is directed by Charles Martin Smith, written and executive produced by Garry Jenkins and produced by Adam Rolston, Tracy and Steve Jarvis of Parkhouse Pictures and Andrew Boswell and Sunny Vohra of Twickenham Studios.

It is executive produced by Adrian Politowski and Martin Metz of Align, Brian O’Shea and Nat McCormick of The Exchange, Philip Burgin, Martin McCabe, and Mick Southworth of Enriched Media Group, Perry Trevers of Studio Pow, and Adam Coburn and Pete Bury.

A STREET CAT NAMED BOB was released by Sony Pictures in the UK on November 4th 2016. The film was given a Royal world premiere in London with the Duchess of Cambridge in attendance.

Happy Christmas from Snoopy & the gang