You are here: Home » Fellini is arriving home in 4K

On what would have been Federico Fellini’s 100th birthday, Studiocanal is delighted to announce the release of two Fellini classics, as part of the Vintage World Cinema collection, to mark the Italian auteur’s centenary.
Stunningly restored with special bonus content, THE WHITE SHEIK and NIGHTS OF CABIRIA come to Blu-ray for the first time and DVD and Digital from Spring 2020. 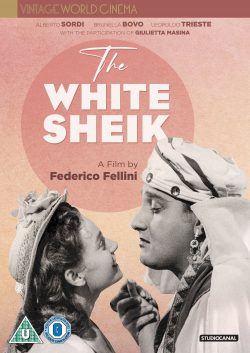 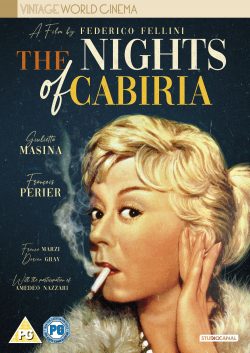 Winner of four Academy Awards, Federico Fellini is one of the most revered directors in the history of cinema. A visionary, a dreamer and a passionate storyteller he created original and unique films celebrating the ceaseless carnival of life. With his vivid visual style, iconic, surreal imagery, sly humour and magical sense for the bizarre, Fellini’s groundbreaking work has influenced and inspired such celebrated directors including Woody Allen, Pedro Almodóvar, Terry Gilliam and David Lynch.

A group of people around each other Description automatically generated

Fellini’s debut as a solo director was the joyful romantic comedy THE WHITE SHEIK (1952), co-written by Fellini from a story he collaborated on with Michelangelo Antonioni, it starred veteran actor Alberto Sordi alongside Fellini’s wife and muse Giulietta Masina. Flowing between real life and fantasy THE WHITE SHEIK tells the story of a newlywed couple’s honeymoon that turns into disaster when the virginal bride runs away in search of the eponymous dashing hero of a photo-strip cartoon, who fulfils her naïve romantic ideals. Her distraught husband proves not to be immune from temptation himself when he encounters a prostitute during the search for his wife.

Co-written by Fellini, with contributions from Pier Paolo Pasolini NIGHTS OF CABIRIA (1957) again stars Giulietta Masina in this story of an unfailingly optimistic prostitute and her misadventures in and around the Eternal City. Cabiria wanders the streets of Rome looking for true love but finds only heartbreak. Even when she is robbed by her boyfriend and left to drown, after her rescue she carries on searching for happiness. She meets and is courted by Oscar and it seems that her struggles are finally over, but things may not be what they seem. This Oscar-winning, funny and poignant neo-realism masterpiece was the inspiration for Neil Simon’s 1966 musical Sweet Charity, which itself was adapted for the screen by Bob Fosse three years later.

THE WHITE SHEIK and NIGHTS OF CABIRIA are currently screening as part of the BFI’s two-month season at BFI Southbank (Nights of Cabiria is also included in a tour of classic Fellini films to cinemas nationwide).

Fellini & his most cherished films

Valentino is coming home as The Son of the Sheik