You are here: Home » MUBI reveals its new ident

MUBI, the global distributor and film streaming service has unveiled its new ident, which was filmed and created by design studio SPIN and features sound design by Pentagram’s Yuri Suzuki.

The first time the new ident will be seen by a public audience will be with MUBI’s theatrical release of Leos Carax’s Cannes-opening film Annette. The film will be released in cinemas across the UK and Ireland starting September 3 and will receive its UK premiere at the Edinburgh International Film Festival on August 21st. Annette’s original screenplay and music is written by Sparks (Ron Mael and Russell Mael) and stars Adam Driver, Marion Cotillard and Simon Helberg. The film and Leos Carax won Best Director at the Cannes Film Festival 2021.

The new 2021 iteration was inspired by the fascinating story of Henri-George Clouzot’s L’ Enfer (The Inferno, 1964), a film that was never finished and was later released as a documentary. L’Enfer was influenced by the art of the time during the sixties, which included optical artists Victor Vasarely and Jean-Pierre Yvaral who were known for using shapes, colours and patterns to create images that look as if they are moving or blurring. This was a key inspiration for SPIN, MUBI’s long-standing creative partner, who created the MUBI identity and led on the visual design of the new ident.

“We loved the idea of making an atmospheric journey that gives a sense of travelling through time, from the beginnings of film in black and white, evolving into glorious colour, from complexity to clarity that ends on MUBI’s identity. The colour palette was also very much inspired by Wong Kar-wai’s films – deep, rich, evocative and very beautiful.” Tony Brook, SPIN

Experimenting with an inventive blend of digital animation, projections and high-end digital cinema cameras, SPIN transported the historic inspiration into the now and created an evocative visual love letter to cinema that speaks of film just as much as it speaks of MUBI.

To complement the visuals, Yuri Suzuki and his team at Pentagram led on the sound design using multiple innovative techniques such as musique concrete, tape music, pen point percussion and synthesis and string recordings to achieve the unique blend of sounds.

“As the ident needed to be of different durations, we had to create a sonic DNA that could work equally well across three lengths. We created a DNA that could be contracted or subtracted from, whilst still retaining one overall mood. This approach is something we call modular sound branding, and through the use of creative arrangements, we are able to tailor the identity to any length. The ident also needed to be mixed and mastered for playback on small mobile devices all the way to 5.1 Dolby surround sound.” Yuri Suzuki, Pentagram

Techniques used by Pentagram for the sound design included

Reel to reel tape recorders: known for lo-fi recording quality they are synonymous with Musique Concrete, which enabled Pentagram to exploit the tonal qualities of tape. Tape typically adds a warmth and grittiness to sound – something that’s increasingly hard to find in the digital era. Tape was also cut up and spliced to create a collaged sound, which was used to create a textured and nuanced background for the ident, and this blended nicely with the melodic string recordings 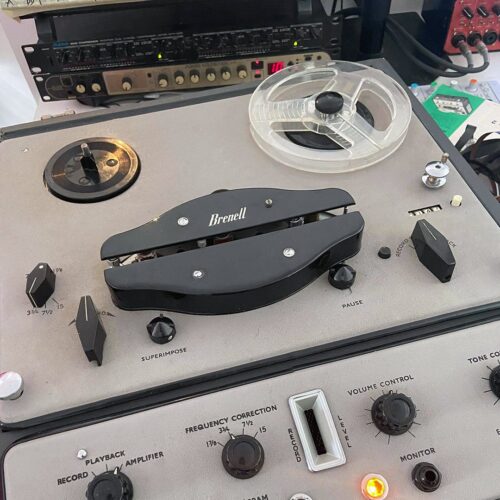 Topflight string players: conducted recording sessions with some of the finest players in the UK, including violinist Raven Bush. The emotive and expressive nature of strings gives the ident a great depth of emotion and character, and was used to sit beautifully above the experimental textures provided by the tape sounds

Pen Point Percussion: This sound is created by drawing dots or points on a film machine. These dots are then turned into sound when the machine is turned on. The technique was created by Norman McLaren and is synonymous with the world of cinema and sound. This tonal quality was used to give the ident excitement and energy

Noomi Rapace at the Gala Screening of ‘Annette’

Annette is coming to UK cinemas