You are here: Home » The Dam Busters at the Royal Albert Hall

The UK’s largest event commemorating the Dam Busters Raid – the RAF’s most daring operation of the Second World War – takes place on 17 May, exactly 75 years to the day. The event will be held at the Royal Albert Hall and will be simulcast to nearly 400 cinemas nationwide. 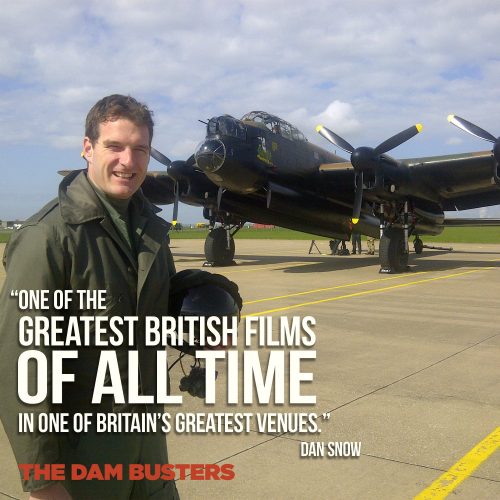 From 7.15pm – 8.15pm proceedings will be simulcast into close to 400 cinemas nationwide and the event will culminate, in both the Royal Albert Hall and in cinemas broadcasting the stream, with a screening of The Dam Busters, starring Sir Michael Redgrave and Richard Todd, in stunning 4K definition.

“One of the greatest British films of all time in one of Britain’s greatest venues. It’s going to be an unforgettable night of commemoration and nostalgia.” –  Dan Snow

Regarded as a British classic, The Dam Busters is directed by the late Michael Anderson. Based on the legendary true story of Commander Guy Gibson and his squadron, The Dam Busters captures all the thrilling action and suspense of the magnificent exploits of a group of young pilots and their crews, charged with taking out the supposedly impenetrable Ruhr river dams of Germany with an ingeniously designed bouncing bomb. Starring Richard Todd as Gibson and Michael Redgrave as scientist and engineer Dr Barnes Wallis, the film also immortalised composer’s Eric Coates’s masterpiece: The Dam Busters March.

The impact of The Dam Busters on modern filmmakers spans the decades: director George Lucas hired the film’s special effects photographer Gilbert Taylor to work his magic on the original Star Wars; and The Lord of the Rings director Peter Jackson has long been attached to a remake, based around a screenplay by actor/writer Stephen Fry.

THE DAM BUSTERS will be available on DVD / Blu-ray / EST and Collector’s Edition via STUDIOCANAL’S Vintage Classics label from June 4th, with a host of extras including an exclusive ‘Making of The Dam Busters’ documentary. The Collector’s Edition will include the feature in 1.37 and 1.75 aspect ratios, a 64-page booklet, a rare aerial photographic print of the Möhne Dam following the raid (signed by the surviving members of the original 617 Squadron), an RAF Chastise Lancaster Bombers poster and a set of 5 art cards.

The Great Escape is coming back