You are here: Home » Can Aniara find its way home?

Arrow Films is proud to celebrate the UK Premiere of the critically acclaimed Swedish Sci-fi film ANIARA at Edinburgh International Film Festival on 20th June with it being released from 30th August in UK cinemas and on digital platforms including iTunes, Sky Store and Amazon.

Based on a concept by Nobel prize-winner Harry Martinson, ANIARA is the story of one of the many spaceships used for transporting Earth’s fleeing population to their new home-planet Mars. But just as the ship leaves the destroyed Earth, she collides with space junk and is thrown off her course. The passengers slowly realize that they’ll never be able to return.

The Swedish Nobel Prize winner Harry Martinson wrote ANIARA as a poem in 1956 affected by the Cold War and the test detonations of the Hydrogen Bomb. Translated into different languages and developed into opera and stage productions, this is the first film adaptation.

Emelie Jonsson (The Unliving, Stormaktstiden) stars as ‘MR’ who runs a room where a sentient computer allows humans to experience near-spiritual memories of Earth. As the ship drifts further into the endless void and more passengers are in need of her services, pressure builds on MR as the only one who can keep the growing insanity and lethal depression at bay. 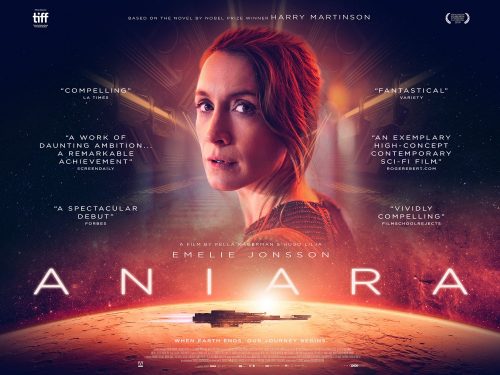 Directors Pella Kågerman and Hugo Lilja said, “We both felt the necessity to make this film. There’s a risk that ANIARA might become our future and the questions the film deals with are extremely relevant today. We want the audience to reflect on the spacecraft they’re already onboard, called Earth and the extremely short period of time we have on it.”

Producer Annika Rogell said: “Pella Kågerman and Hugo Lilja are two of the most interesting up and coming directors. I’ve followed them since film school and have the utmost respect for what they have produced. Not least THE UNLIVING, which showed how sci-fi can become more naturalistic and create a presence that often is lacking in this type of genre film, which tend to concentrate on the form and forget the drama.

I also think the three orginators of ANIARA is what makes it unique. Martinson’s poem, Kågerman’s history coming from the philosophical art world and being able to translate Martinson’s emotional depth and Liljas’ sense of magical sci-fi filmmaking.

My goal as a producer is to highlight problems of our times and tell stories about them in an entertaining and moving way. I want the audience to feel that they have actually been onboard ANIARA when they’ve seen the film.”

See much more of Aniara