You are here: Home » A Cambodian Spring is coming 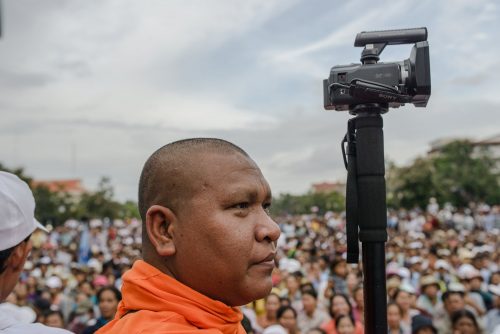 Dartmouth Films and Little Ease Films are thrilled to release their Award-winning documentary ‘A Cambodian Spring’ into UK cinemas from 18th May with its UK Film Premiere taking place on 17th May at Curzon Soho. Winner of the Special Jury Prize at the 2017 Hot Docs International Documentary Festival and winner of Best Documentary at the Brooklyn Film Festival, the critically-acclaimed film has gone on to win a slew of other awards and feature in many other film festivals around the world.

A Cambodian Spring is an intimate and unique portrait of three people caught up in the chaotic and often violent development that is shaping modern-day Cambodia. Shot over 6 years, the film charts the growing wave of land-rights protests that led to the ‘Cambodian Spring’ and the tragic events that followed. This film is about the complexities – both political and personal, of fighting for what you believe in.

Director Chris Kelly said: “After more than nine years in the making, I am thrilled that A Cambodian Spring will have its UK theatrical release on the 18th of May. The film has been a huge labour of love for me, and I hope that the passion and care that went into making it comes through to the UK audience and creates a memorable experience.

A Cambodian Spring is for me a deeply personal film. It is an exploration of what motivates us, what gives our lives meaning, and what happens when our personal desires colour and shape our actions. It is an unapologetically subjective portrait of my time in Cambodia, of the people who shared their lives with me and of the shifting landscapes, both physical and emotional, that I found there. There is a powerful original score by acclaimed electronic musician James Holden, whose soundtrack perfectly complements the decaying landscapes of the film.”

Executive Producer Christopher Hird said: “Chris Kelly first pitched the idea of this film to me at Sheffield DocFest in 2008, so it is a real pleasure to be able to release the film in the UK – a perfect example of what Dartmouth aims to do: helping directors bring their dream to screen. The film’s journey included an extended spell of editing in the loft of my house and the garnering of international recognition at numerous film festivals and so the hope now is that it will help the campaign to get freedom for one of its main characters, who is unjustly imprisoned in Cambodia.”