You are here: Home » Be careful of the Itsy Bitsy spider

ITSY BITSY weaves a character-driven story of responsibility, love and loss set against a terrifying backdrop of chilling scares and monstrous legends.

When Kara a single mother struggling to raise two children in New York City, receives a job offer to work as a private nurse in the mid-West, it’s an opportunity she can’t refuse. So, she uproots her family, moving them to the remote farm owned by Walter, a semi-retired antiquities appraiser who has multiple sclerosis.

At first, things seem normal enough. But what Kara doesn’t know is that doom preceded their arrival in the form of a mysterious ancient relic. And, if her family are to survive the horrific nightmare now lurking in the shadows, they will need to confront their deepest fears and personal demons. 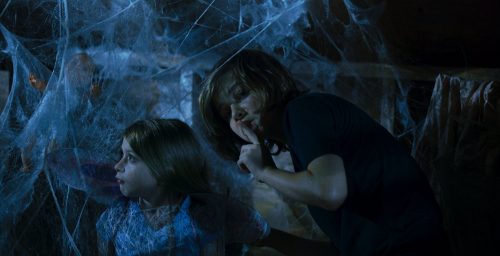 Director/Producer Micah Gallo said: “We hope this film is a fun ride for the audience! We worked extra hard to make a film that delivers on our Spider character and the thrills and chills you’d expect with our title Itsy Bitsy. Our treatment of the Spider was to make sure it was as plausible and thought out as any other actor in our film. We did everything possible with practical effects to enhance the realism of the film so that when people leave the theatre, they saw a living creature.

It’s vindicating to have this film come out now and we hope audiences enjoy our love letter to mothers and feel the excitement of the fun creature popcorn movies we recall from younger years.”