You are here: Home » All of The Big Bang Theory in one place

Sit down in YOUR SPOT and celebrate the boxset release of the no. 1 comedy in the world. The Big Bang Theory: The Complete Series, featuring all twelve seasons in one mind-blowing box set for the first time ever, available on Blu-ray™ and DVD from 11th November 2019. 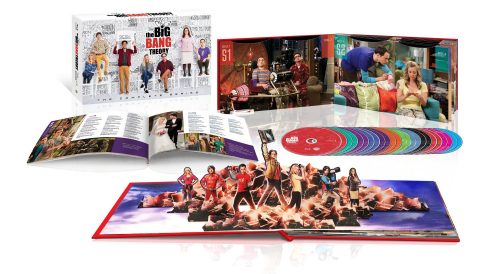 The Big Bang Theory: The Complete Series, includes all 279 original episodes from 12 seasons of the much-loved sitcom and will be available for fans to own on DVD (£65.00) and a premium Limited Edition Blu-Ray (£100.00). The complete set features nearly 12 hours of extras, along with an additional disc including three exclusive and never-before-seen special features! The special Limited Edition Blu-Ray Boxset comes in a beautiful book with a fun pop-up.

For years, fans have been delighted to watch their favourite physicists Leonard and Sheldon navigate the universe and everyday life, along with Penny, and fellow scientists Howard, Raj, Amy and Bernadette, as well as other beloved characters.

Leonard and Sheldon are brilliant physicists, the kind of “beautiful minds” that understand how the universe works. But none of that genius helps them interact with people, especially women. All this begins to change when a free-spirited beauty named Penny moves in next door. Sheldon, Leonard’s roommate, is quite content spending his nights playing Klingon Boggle with their socially dysfunctional friends, fellow Caltech scientists Wolowitz and Koothrappali. However, Leonard sees in Penny a whole new universe of possibilities … including love.

I Spit on Your Grave: The Complete Collection is coming home