You are here: Home » Neo-Tokyo is exploding at home 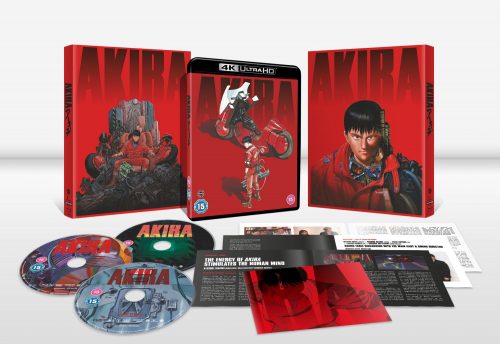 Following the success of the recent IMAX release Manga Entertainment UK are thrilled to announce the upcoming 4K Ultra HD Blu-ray release of AKIRA. The special Limited Edition is releasing on 7th December.

“It’s the ultimate edition! Experience Neo-Tokyo like you’ve never seen it before: from the comfort of your own sofa, in glorious 4K. We’re so excited to bring this must-have release out just in time for Christmas.” – Darcy Giles, Social & PR Manager, Manga Entertainment.

Pre-orders are now open for this hugely sought after Limited Edition.

The definitive anime masterpiece! Neo-Tokyo, 2019. The city is being rebuilt post World War III. Kaneda and Tetsuo, two high school drop outs, stumble on a secret government project to develop new weapons – telekinetic humans. Tetsuo learns of the existence of his ‘peer’, Akira, the project’s most powerful subject, and determines to challenge him…

Two incredibly influential sci-fi epics, from one of Japan’s most inimitable filmmakers are on their way home