You are here: Home » Who won what at the 31st Annual Critics’ Circle Theatre Awards 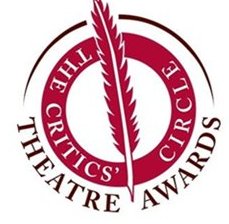 Rebecca Frecknall’s electric Cabaret revival led the list of winners at the 31st Annual Critics’ Circle Theatre Awards, taking home three major awards at the Ham Yard Hotel ceremony on Sunday. Frecknall’s acclaimed new staging of the 1966 musical – which stars Eddie Redmayne as the Emcee in his first role on the London stage in nearly a decade – won her the Best Director award. One week after attending the Academy Awards ceremony as a nominee, Redmayne’s co-star Jessie Buckley was awarded Best Actress at the Critics’ Circle for her astonishing performance as Sally Bowles, Cabaret’s tuneless chanteuse. Tom Scutt’s subtly sinister stage design won him the Best Designer award for the second year running, after he oversaw the Playhouse Theatre’s transformation – auditorium and all – into Cabaret’s Kit Kat Klub.

But in a shock twist at the end of the night, Rupert Goold’s Spring Awakening revival scooped Cabaret to the final award, Best Musical. Between the two shows, it was a banner year for musicals, with Spring Awakening winning a pair of awards to become the Critics’ Circle’s second-most celebrated production of the night. Stuart Thompson was a joint winner of the Jack Tinker Award for Most Promising Newcomer for his poignant performance as Moritz. He shared the award with Samuel Creasy, making his stage debut as the hero of the Bridge Theatre’s adaptation of Phillip Pullman’s cult novel, The Book of Dust – La Belle Sauvage.

For her fierce performance as the eponymous hero of Hamlet, directed by her long-term collaborator Greg Hersov, the Critics’ Circle awarded Cush Jumbo the Trewin Award for Best Shakespearean Performance. The final prize for performance was awarded to Ben Daniels, who was named Best Actor for his role as the defiant Ned Weeks in Dominic Cooke’s new staging of Larry Kramer’s The Normal Heart. A largely autobiographical account of Kramer’s own experiences as the co-founder of an HIV advocacy group operating in the early years of the AIDs crisis, Cooke’s revival marked 35 years since its UK premiere.

The awards come one week before London’s Olivier Awards, in which Jessie Buckley, Cush Jumbo and Ben Daniels are all nominated for major acting awards. They now are even likelier prospects to triumph at next weekend’s ceremony.

Zadie Smith and Igor Memic were named joint-winners of the Most Promising Playwright award. Although a household name as a best-selling novelist, Smith counted as a ‘newcomer’ for the Critics’ Circle because The Wife of Willesden, a reimaging of Chaucer’s Wife of Bath, is her debut play. Smith now adds her Critics’ Circle Theatre Award to an Orange Prize for Fiction, the Whitbread First Novel Award, and the James Tait Memorial Prize, amongst others. Igor Memic also won for a debut play, his heart-wrenching romance Old Bridge drawing upon Memic’s personal history in its depiction of war-torn Bosnia.

The in-person ceremony marked the return of the Critics’ Circle Theatre Awards after the pandemic forced the organisation to skip a year’s ceremony for the first time in its history. To mark this hiatus, the Critics’ Circle created a one-off category of commendations for those “who went above and beyond to keep theatre alive” during this period. The National Theatre was celebrated, with critics citing its effort to broadcast theatre to the nation through the NT Live screenings, and the excellence of its filmed production of Romeo & Juliet, which also starred Jessie Buckley. Elsewhere, the Critics’ Circle commended Jermyn Street Theatre for 15 Heroines, a series of filmed monologues using up-to-the-minute-tech to reimagine ancient poems by the Roman poet Ovid. The Old Vic was commended for its IN CAMERA season and the Original Theatre Company was commended as a pioneer in building new theatre steaming platforms. The Critics’ Circle gave an individual award to Nimax CEO Nica Burns, who pioneered new forms of socially distanced theatre in her venues around the world.

In attendance at the ceremony were many of this year’s winners, among them novelist and essayist Zadie Smith (The Wife of Willesden), actor Ben Daniels (The Normal Heart, The Exorcist), British actress and writer Cush Jumbo (Hamlet, The Good Wife), and British playwright and screenwriter James Graham (Best of Enemies, This House). They celebrated alongside awards presenters and guests, including actors Gethin Anthony (Game of Thrones; Aquarius), Tom Felton (Harry Potter), Kerry Fox (Shallow Grave), Harry Lloyd (Game of Thrones) and leading directors such as Rufus Norris (the National Theatre), Rupert Goold (the Almeida Theatre) and Lynette Linton (the Bush Theatre).