You are here: Home » Shadow of the Tomb Raider Golden Dagger has been found

[Images of Jada Sura removed due to legal/copyright concerns]

Over 500,000 keen-eyed treasure hunters tuned in to solve the riddles, and as of 11am Thursday 13th September, the location of the £20,000 prize was discovered.

SquareEnix® created the clues in conjunction with what3words; a simple way to talk about location. The technology company has divided the world into a grid of 3m x 3m squares, each with a unique 3 word address. Their free app, available for iOS and Android, and their online map enable people to find, share and navigate to 3 word addresses in 26 languages to date. The golden dagger, and £20,000 prize, was hidden at fruit.seriously.dressings, a vacant shop on Stony Stratford High Street in Milton Keynes. 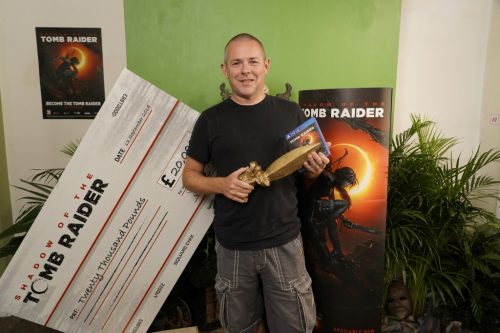 The winner of the £20,000 prize, Nick Harris – travelled all the way from Bedford in hopes of finding the artefact. “Gobsmacked is the word!” Said Harris of finding the dagger and winning the prize.

“I can’t believe it at the moment. It’s Amazing! I’m almost speechless! Since the beginning on the PlayStation Tomb Raider has been an ongoing passion, I’m definitely excited for Shadow of the Tomb Raider and to get back into the world of Lara Croft”.

Harris would like to use the prize money to take his wife on a trip to Peru, the location of Lara Croft®’s latest adventure.

In Shadow of the Tomb Raider, Lara must master a deadly jungle, overcome terrifying tombs, and persevere through her darkest hour. As she races to save the world from a Maya apocalypse, Lara will ultimately be forged into the Tomb Raider® she is destined to be.

Created by a team of veteran TOMB RAIDER developers at Eidos-Montréal, in collaboration with Crystal Dynamics, the game will be available on September 14, 2018 for the Xbox One family of devices including Xbox One X, PlayStation®4 computer entertainment system, and Windows PC/Steam®.