You are here: Home » Who is Ruth Bader Ginsburg? 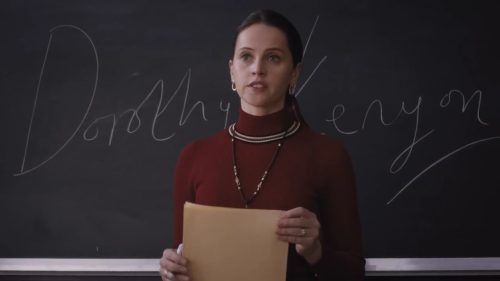 The trailer, and poster, for the upcoming bio-pic of one of the great Supreme Court Justices, Ruth Bader Ginsburg, On the Basis of Sex, is here.  It’s the story of her life, decades before taking a seat on the highest court in America.

It shows what a fighter she has always been.  Not only fighting for her right to study law but to fight for the right for women to be treated equally under the law.  Something she is still fighting for all the decades later.

Set to be one of the year’s most inspiring and entertaining films, this is the powerful and timely true story of US Supreme Court Justice Ruth Bader Ginsburg who led the fight against gender discrimination and blazed an unprecedented trail for equality. From being one of only a few women accepted at Harvard Law to co-founding the Women’s Rights Project at the ACLU, Bader Ginsburg overcame all odds to become one of the most influential figures in the battle for equal rights, passionately arguing ground-breaking landmark cases and giving a voice to those unable to be heard. Lighting up the screen with fantastic performances, Felicity Jones stars as Ruth Bader Ginsburg and Armie Hammer as her husband Marty, a talented lawyer in his own right who offers unwavering support to his wife

Who killed Kim Jong-nam & why

The Hateful Eight has a new trailer