You are here: Home » What is Haile hiding?

Curzon Artificial Eye are thrilled to unveil the official UK trailer and poster for THE FLOOD, in UK cinemas and on demand from Friday 21st June, with a Special Event Screening followed by panel discussion on 17th June.

Wendy (Lena Headey), a hardened immigration officer is offered a high-profile asylum case, judged on her ability to quickly and clinically reject applicants. Through her interrogation, she must uncover whether Haile (Ivanno Jeremiah) is lying and has a more sinister reason for seeking asylum.

We follow Haile on his perilous 5000 kilometre journey – over oceans, across borders, and amidst the flurry of the Calais Jungle – to find solace and safety in the UK. But now he must cross the final hurdle. Based on multiple true stories, The Flood is a thoughtful and timely reflection on the humanity within the refugee crisis. 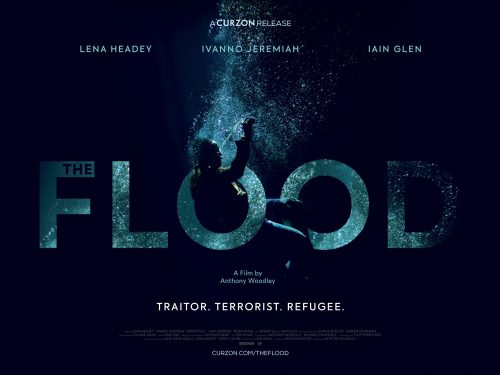 Set in France and the UK at a time when politics are more divisive than ever, and lines between refugees and terrorists are intentionally blurred by politicians, the filmmakers wanted to highlight the difference between the extraordinary and perilous journey people are making with the slow, clinical, and bureaucratic response around the world. The filmmakers researched heavily, basing the script on actual stories, including interviews with ex Home Office officials, for a measured and objective look at issues that permeate the news regularly.

Director Anthony Woodley, writer Helen Kingston, and producer Luke Healy all spent time volunteering in the Calais Jungle and felt compelled to make a film that was truthful to the refugee experience. The result is a poignant, measured piece of filmmaking, setting itself apart as one of the few feature narrative films that explores what’s happening every day at our borders.

The film’s week of release will also coincide with World Refugee Day on the 20th June, spotlighting the plight of countless refugees. Curzon will be working closely with the UNHCR to help promote awareness and aid for true-life stories THE FLOOD serves to capture.

What is behind Van Gogh’s Sunflowers?

Insidious goes in a new direction

Spooks gets a poster