You are here: Home » The Third Man is back for a single day

An all-time cinematic classic and one of the finest British films ever made, Carol Reed’s film noir masterpiece THE THIRD MAN returns to cinemas this Autumn to celebrate its 70th anniversary, in stunning 4K, and a brand new trailer and poster have been released in conjunction with the exciting announcement.

On 1st September 2019, 70 years to the day since the World Premiere, Studiocanal will celebrate the film with a special event at Picturehouse Central, London. Cultural historian Matthew Sweet will host a Q&A featuring one of the last remaining crew members, Angela Allen, as well as special guest and fan of the film, screenwriter Hossein Amini (The Wings of the Dove, The Two Faces of January), with more special guests still to be confirmed. There will also be a live musical performance from Cornelia Mayer, a Viennese zither player who trained with Anton Karas (the composer and performer of the iconic original soundtrack). Tickets for the event can be purchased here. 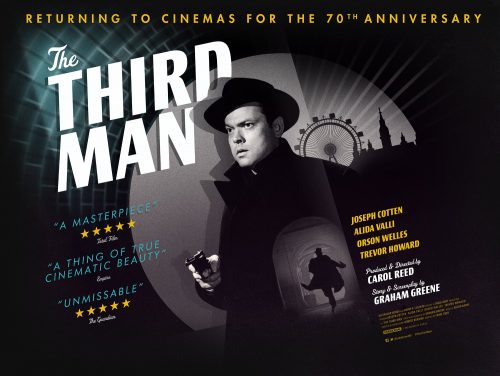 On 29th September, the film will return to cinemas across the UK for one day only, and screenings will be followed by the filmed Q&A from the 1st September anniversary event.

THE THIRD MAN stars Joseph Cotten as Holly Martins, a naïve writer of pulp westerns, who arrives in a bombed-out, post-war Vienna to meet his childhood friend Harry Lime, only to find that Lime has apparently been killed in a suspicious accident. Martins, too curious for his own good, hears contradictory stories about the circumstances of Lime’s death, and as witnesses begin to disappear he soon finds himself chased by unknown assailants. Complicating matters are the sardonic Major Calloway, head of the British forces, and Lime’s stage actress mistress, Anna Schmidt. Will Martin’s curiosity lead him to discover things about his old friend that he’d rather not know?

Directed by Carol Reed from an original script by Graham Greene, THE THIRD MAN won both the Grand Prix at Cannes and the BAFTA for Best British Film upon its release, and is beloved by filmmakers the world over, from Martin Scorsese to Ben Wheatley. Featuring Robert Krasker’s Oscar-winning cinematography showcasing the shadowy underbelly of a bombed-out Vienna, an endlessly quotable performance by Orson Welles and an iconic soundtrack from zither player Anton Karas, a Viennese busker plucked from obscurity by Reed, THE THIRD MAN remains one of the most memorable thrillers of all time.

Updated August 14, 2019: Danny Leigh has been replaced by Matthew Sweet as the host of the Q&A.

Is The Winslow Boy guilty?