You are here: Home » The sad tale of Roald Dahl’s daughter Olivia is coming to UK cinemas.

Sky announced the upcoming release of To Olivia, a Sky original, starring Hugh Bonneville as novelist Roald Dahl and Keeley Hawes as his American actress wife Patricia Neal. Based on a true story, the film will be released in cinemas and on Sky Cinema in February 2021. 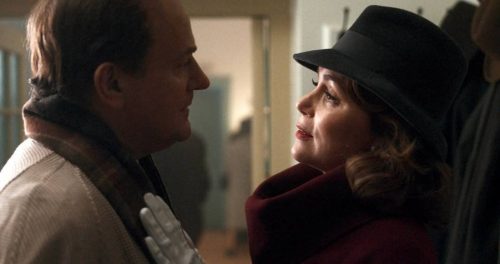 It’s 1962 and Roald Dahl, an eccentric, burgeoning children’s author and his wife, Patricia Neal, a glamourous Hollywood movie star, have retreated to the English countryside to bring up their expanding young family. Tragically, their lives are turned upside down by the devastating death of their daughter Olivia and as the couple struggle through the unimaginable loss, their shared grief becomes a source of redemption and strength which changes their lives forever.

Inspiring and heart-warming, To Olivia features an all British cast including Sam Heughan, Geoffrey Palmer Conleth Hill, was directed by John Hay (Lost Christmas, There’s Only One Jimmy Grimble) and co-written by John Hay and David Logan.

Sarah Wright, Director of Sky Cinema and Acquisitions at Sky UK & Ireland comments: “We are all familiar with the extraordinary Roald Dahl and Oscar-winning actor, Patricia Neal, but in To Olivia, audiences will discover the true story of the heartache and struggles the outwardly glamorous couple experienced prior to their immense success. I’m thrilled to be working with Atticus Films to bring this brand new British film exclusively to Sky Cinema.”

The Witches are on their way home